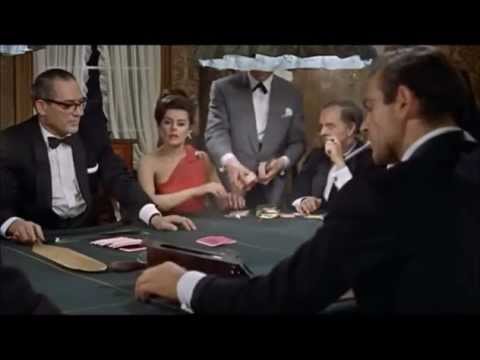 Without a doubt, the most immortal arrival of a character in any movie, ever is that of Orson Welles as devious, amoral black market peddler Harry Lime – widely believed to have recently died – into this stunning post:- War noir thriller. Hearing scuffling footsteps across the Viennese cobbles, Joseph Cotton’s Holly Martins follows the sound to a back alley. His quarry is lost in the shadows until, by chance, a cat mewls and a nearby window is lit, throwing a shaft of light across his face. Welles’ smile is as sly and ambiguous as the Mona Lisa’s, and Anton Karas’ zither music begins its dreamy, forlorn twang. In that shard of light we come to know everything about the fabled shyster, sly devious, charming, deadly.

This one could just as easily compete in the list of greatest shots ever, with director David Lean at his most inspired, obsessive and arrogant.

The scene: pivotal and romantic, is the first meeting of Lawrence (Peter O’ Toole) and Sherif Ali (Omar Sharif) at a desolate waterhole, sacred to one tribe, forbidden to another.

As Lawrence and his guide take a drink, they spy a ghostly figure in the distance. And Lean holds the shot, and holds, letting the mirage take substance, that of a lolloping camel with a black-clad rider. It is Ali, and before he is within speaking distance he has shot the guide stone dead.

We’re in a Monte Carlo casino, at a baccarat table veiled in silver smoke, viewing a rather attractive lady from the vantage point over the leading-man’s shoulder.

They strike up a conversation, smooth as silk. 007 first: “I admire your courage, Miss…?” “Trench, Sylvia Trench.” she returns coyly. “I admire your luck. Mr….?” His answer is film history. “Bond. James Bond.” He lights a cigarette, the camera coasts up to Sean Connery’s face, a slick – backed Adonis, and the music coolly breaths over the scene as every boy in the house gains a role model for life.

Now why, you might ask, isn’t Raiders the big numero uno for Indy? It’s certainly a good one, hut for guile and humour it’s the tracking shot opener from Temple Of Doom, wending its way across the floor of Shanghai’s Club Obi-Wan to end up at the table, where Indy gasp is dressed in a tuxedo. Part Bond satire- part fully-fledged musical number, this is the entrance of a familiar friend on unfamiliar ground. But it’s still unequivocally Indiana Jones, with that frail smirk and pragmatic attitude to being poisoned.

Forgetting the subsequent family opus directive from Camp Lucas, back when the tall, caped figure was simply the villain, there was no messing about: the fleeing princess trapped, her spaceship door explodes and white-clad storm-troopers pour in. As the smoke clears, another figure appears, square on. The starkly locked-off camera laps him up, six feet plus, jet black from head to toe, striding down the corridor, his cape a-swirl. That’ll be the bad guy, then.

For all the zappy special effects that taffy-stretched Jim Carrey’s already elastic features to Looney Tune extremities, the one thing everyone takes away from The Mask is the arrival of Cameron Diaz into Stanley Ipkiss’ bank. She’s like something from the ‘40s or ‘50s, a heavenly vision in a scarlet dress.

Then she bends to adjust a shoe, causing the split to peel open and reveal a precious streak of pale thigh… Steady, now. It was so sexy, so lightning-bolt sassy, it stopped every male viewer in his tracks and made Diaz a superstar on the spot.

Naturally, folk always recall the dramatic conclusion to Billy Wilder’s biting Hollywood ghost story, but Gloria Swanson’s turn as fallen silent idol Norma Desmond also possesses a lovely introduction. Here, it is not the florid activity of the camera that counts but the acid dialogue. In the depths of her Sunset mansion, her face shadowed in sunglasses, Desmond is confronted by surly, down-at-heel screenwriter William Holden. “You were big once.” he mocks. “I am big.” she retorts, echoing the film’s theme of transient fame. “It’s the pictures that got small.”

Well, he was hardly going to creep in round the back, was he? An entrance like this, by definition, was going to be big. Fay Wray, chained to the posts beyond that helpfully gorilla-sized gateway, rests her chains then is petrified when she hears a stomp. No a STOMP. Tree branches go crashing and he, no HE, strides into view. Subsequent years may have taken special effects to fabled yonders, but there remains something innately awe-inspiring about the stop-motion arrival of King Kong; he exudes, tor all his stiffness, a primal majesty. Imagine what it was like in 1933… truly the Eighth Wonder Of The World.

9.  CAPTAIN JACK SPARROW, PIRATES OF THE CARIBBEAN (2003)
His noble chin jutting to the sky, the camera eases back from Captain Jack Sparrow balancing on the mast of his ship. Then it eases back some more. He is spying for shore, resplendent in his pirate regalia. Then we ease back a trifle more. The ship, well, seems to be more of a tiny boat, and a sinking one at that. By the time it reaches the small wooden pier, only the tip of the mast is above water, yet Jack steps with perfect timing onto dry land. Without, yet, a Mutter of Johnny Depp’s fabulous, bedraggled, gold-rimmed performance, we already know Jack a fool, a loser, concealing the craftiest noggin on the seven seas.

Are we mad? The much-maligned Ben Affleck making a top ten? Well, yes, his performance as an egotistical oaf of an Elizabethan actor is about the best thing he’s done. It’s a riotous cameo writ large, part self-parody, part puffball satire “What is the play and what is my part?” he swaggers as he strides into the theatre that only occurred because he was dating star Gwyneth Paltrow at the time, but when he booms into action he damn near waltzes off with the entire movie.