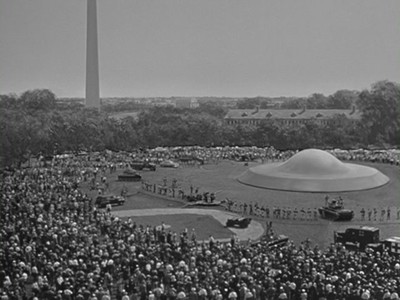 1. The Day the Earth Stood Still

One of the greatest movies of all time. I love that he’s an alien but he’s also human. Star Trek first contact stole loads of this… Wait, every Sci-Fi has. If you think you know about Sci-Fi movies and you haven’t seen this, you’re like a priest who’s never read the bible and/or molested a child.

This movie appears all over this site, why? Because it’s one of the greatest horror movies ever made. Every Halloween I watch this movie, without fail, no exceptions. It definitely deserves to be (at least) No.2 in our “Alien Invasion Films” list.

3. Invation of the Body Snatchers

First off, I mean the old one, not the numerous remakes after it (which are all pretty good). I like the fact that normally black & white horror/sci-fi movies are a little slow moving at the start. This is not the case with “Invasion of the Body Snatchers”. It’s cool that the alien invaders look like us. Make us question our neighbours, friends and even family members. That’s what all good alien invasion films should do, right?

Very, very, very underrated movie. The cinematography (I know, I sound like an asshole talking about cinematograpghy…) is amazing. The opening scene with the fish bowl… Pure class!

5. Close Encounters of the Third kind
There is a good arguement to suggest that this doesn’t deserve to make our top 10 alien invasion films. As the aliens don’t really invade at all. However,  It would have been a f%cking travesty of epic proportions to leave it off any list that includes the word “Aliens”.

6. Monsters
Great movie, and there was a great buzz when it came out. People have forgotten about it with time. Not sure why? It, as much as any other movie on here, deserves to make our alien invasion films list.

We’re the alien invaders in this one! See, makes sense… right? This film is all based roughly around Plato’s Republic. I’m sure you’ve all read it, so there is no need to refresh your memory.

8. District 9
When aliens invade they don’t need to be these all powerful, violent beings. They can simple out breed us. “If we can’t get them out, we’ll breed them out”. Longshanks knew the score.
9. Forbidden Planet
Once again, we are the alien invaders. “Just leave them alone, get in the ship and leave the hot girl and the old man… done!” Seriously though, you need to see this movie. As good today, as the day it came out (I’m guessing). Watch out for the scene when the monster is coming and they get ready to defend the ship, INCREDIBLE!

I work in advertising (I don’t just spend my life writing grammatically incorrect posts on my site[That my brother then fixes for me]). This movie, in my opinion, is enjoyed even more by people in that sector.  It was always going to make any top 10 alien invasion films list. If you haven’t seen this movie, you’re missing out. It’s more fun than a van full of drunken teenage cheerleaders. It also features the longest recorded fight scene… well it did anyway, not sure if it still has the record.