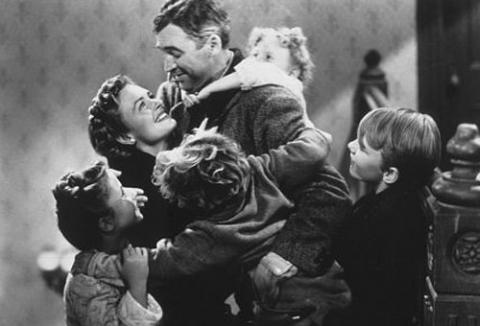 A heartwarming, sentimental movie that gushes over you in a wash of holiday schmaltz? Don’t believe it. This is a film about a man who is defeated by life, yet who manages to salvage a sense of worth and meaning in a cold, unfair world. The bulk of the movie tortures us with George Bailey’s many painful sacrifices, but the latter alternate-future portions are even crueler.  Doesn’t angel Clarence’s tactic of showing all of George’s family and friends either dead or miserable seem harsh, even if the big-picture goal is to reinforce George’s importance?  It is touches like this that give the film a perverse undercurrent. The film boldly stares down the holiday’s negative side, a side of depression and regret, and flips it upside down. One of the greatest American movies.

Other than the story of Christ’s birth, this is the most archetypal Christmas story, influencing every ensuing holiday narrative and firmly planting the genre in secular terrain. Critical retrospectives generally move the 1951 version to the top of the list of Carol adaptations, but this 1984 film betters it in every way, with George C. Scott’s beautifully nuanced Scrooge, a heady script from Roger O. Hirson, and handsomely filmed Shrewsbury locations. It’s uplifting, thought-provoking, fresh, and reassuringly familiar all at once.

Sentiment and slapstick was the holiday formula set in motion by Christmas Vacation but turned into box office gold by Home Alone. Stellar direction, technical credits, and performances elevate a script that easily could have underachieved in less capable hands. Sure, the expertly timed and executed physical comedy in the third act made it a hit, but it’s the film’s heart that makes it a classic. The warmth of the family relationships is enhanced by John Williams’s gorgeous score, which strikes an impish, mischievous tone at the outset but transitions into wistfulness with “Somewhere In My Memory.” Macaulay Culkin’s mugging occasionally becomes tiresome, but Catherine O’Hara is wonderful as the desperate mother in her single-minded determination to get home to her son. (Admittedly, director Chris Columbus reduces the impact of her struggle slightly by having the entire family arrive home only minutes after she does, making her efforts seem pointless.)

Holiday movies of the last quarter century all owe Christmas Vacation a big glass of spiked eggnog, as it set the latter-era Yuletide standard of consumerist suburban woes mixed with slapstick. Every hint of fantasy and magic is scuttled in favor of the simplest of plots: Clark Griswold wants to have an old-fashioned family Christmas, and he’ll do anything to make it happen. The comedic setpieces blend nicely with John Hughes’s quotable dialogue, delivered with immaculate timing by Chevy Chase. One oddity: like the holiday itself, Christmas Vacation is mostly build-up and does not actually feature any scenes on December 25th, making viewers wonder whether the film’s resolving harmony unraveled the next day.

5. A Child’s Christmas In Wales

Dylan Thomas’s short story is beautifully and faithfully adapted in this little-seen holiday gem. It expands on Thomas’s implicit framing device of a grandfather telling tales of “old Welsh Christmas” (although it is difficult to believe that gramps is improvising all this mighty prose on the spot) and adds extra-textual touches to take advantage of the audiovisual medium (young Geraint’s battle with toy soldiers; the haunting use of “All Through the Night” at the end). Nostalgic but not syrupy, festive but not fulsome, this TV production complements Thomas’s gorgeous, witty turns of phrase with equally attractive tableaus and warm characters.  Skip A Christmas Story and watch this instead.

Special effects overshadowed the decreasing charms of the two sequels, but there’s sweetness to spare in this engaging 1994 fantasy. Tim Allen demonstrates his underrated comedic skills and screen presence as a salesman who slowly transforms into Santa Claus. The underplayed humor contrasts with the broad physicality of Jingle All The Way orHome Alone 3, allowing this film to stand tall in a weak field of mid-90s holiday efforts. Plus, the “Armand Assante” gift-list gag is a knowing Judd Apatow-esque moment that’s at least 10 years ahead of its time: a jokey, obscure pop culture reference that relies as much on throwaway timing as it does conventional set-up and punchline.

I can remember watching this film in a Parisian revival cinema, where I sat next to a mother and her young son.  At film’s end, he piped up, “What happened to the snowman, mama?”  Her response was casual and quintessentially Gallic: “Ah, well, he melted.  It happens.”  A similar existential world-weariness must be adopted to avoid any tears in this affecting animated British classic. Howard Blake’s mournful score tells you exactly what’s coming from the very start. In tone and arc, the film has the doom-laden feel of a song about a star-crossed romance, yet its brevity and artistic merit assure that it’s never too much of a drag on the holiday’s upbeat spirit.

Chris Columbus picks up Home Alone and plops it down in New York for a virtual remake. This makes for a strong sense of déjà vu, but in so doing Columbus creates an apt meta-message about the nature of the holiday itself . . . a reassuring tradition that changes only slightly from year to year within the context of certain practices. Taking it component by component, Home Alone 2 does better its predecessor in some ways. The New York locale gives the whole movie a certain toe-tapping pizazz that won’t be found in Home Alone’s sleepy suburban environs. Tim Curry is drolly entertaining as the scheming concierge, a character who stands out partially because he is the only person in the movie who does not have an obvious analog in Home Alone 1.  The final score sheet shows a film that can’t quite bottle the same magic as part 1, but comes astonishingly close.

I’m far from the first to say that the movie itself is the miracle. Its philosophical core is questionable: “Faith is believing in something when common sense tells you not to” is worsened only by “a lie that draws a smile is better than a truth that draws a tear” in the 1994 remake.  Nevertheless, the film cleverly permits the viewer to read it as either bold humanist story or lively quasi-fantasy. Indeed, you can leave the cinema thinking Edmund Gwenn is an amiably insane gent, or believing he really is Santa Claus. This ability to be all things to all people is the film’s great triumph and mirrors the broad cultural appeal of Christmas on the whole. One substantial gripe – the film’s third act courtroom scenes resolve via an abysmal deus ex machina (cleverly rectified by John Hughes in the worthy remake).

Plotless and anecdotal, this is the most overrated Christmas movie ever made, but I include it because of its reputation as a holiday standard. Every other movie on this list has an involving struggle and eventual triumph, like any great story. In contrast, this film is little more than a nostalgic shuffle through a few amusing childhood stories.  Little Ralphie’s mission to get a Red Ryder BB gun is about as much as we get, and director Bob Clark’s focus meanders constantly. Perhaps the movie’s greatest achievement is that it portrays Christmas as we experience it: an array of vague, vaporous, mostly pleasant memories that are difficult to separate from others one year to the next. It’s an amusing sit-down with a favorite uncle, not a movie.