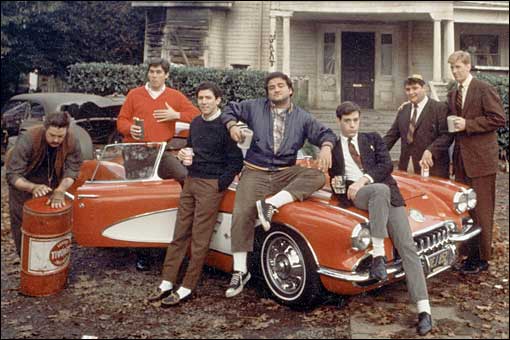 1. Animal House
This was always going to come first, let’s face it! It shaped university for all of us, regardless of whether or not we’ve seen it. “Toga, Toga ,Toga”, necking Jack Daniels, living in a shit hole and getting arrested. We’ve all done it but never realised it was because of “Animal House”. This is why it makes our best college movies list.

2. Revenge of Nerds
What a great opening scene with the parents driving the guys to university. Who knew nerds could be so much fun! I should have been nicer to the nerds in my school but there weren’t any…. Wait a sec, maybe I was the nerd.

4. The Paper Chase
Arguably a more intellectually challenging piece of cinema than any other on our top 10 best college movies list. If you’re looking for something less mindless, more mindful, look no further. My University life was more excite and I’m not in a movie.

5. Rules of Attraction
College isn’t all fun and games! Take a look at the darker, seedier side of it, often seen by a simple change in perspective. At least that’s what this movie would have us believe. Losing your virginity to two guys, as one proceeds to vomit on your back… we all remember those days. right?

6. Back to School
I wish I could go to University with a millionaire! Although I wouldn’t want it to be my old man. Underrated movie, easy to watch, deserves to be on the best college movies list (otherwise it might get forgotten in time and I for one, won’t have that). Rodney Dangerfield I don’t know what happened to you but you are a funny f*cker and I for one will not forget your stupid, idiotic one liners.

7. Dead Man Curve
The scene where they share the slice of lemon after drinking Tequila is brilliant. I do this sometime in bars with strange women, that’s how much this film has affected me. Great ending, full of more twists and turns than a bad episode of “Scooby Doo” on speed.

8. Old School
I wasn’t blown away by this movie to be honest. I know most of you were, it’s got Will Farrell in it, who we all love . However, it left me wanting more, so 9 is as high as you get on our best college movies list!

9. Rudy
I once saw the guy from the hobbit, who plays Rudy in the film Rudy walking down the beach in Hawaii and some funny bastard proceeded to scream,  “You’re going to make the f^cking team Rudy!” Thought I’d share that with you. Anyway, it a sports movie but it’s in university, so get off my back!

10. Real Genius
It’s so nerdy it’s unbelievable. Ironically the biggest nerd is Val Kilmer’s character, who’s meant to be hot as sh*t! Not a great movie but still makes it on our best college movies list. Rethinking this, maybe it shouldn’t be on this list. Any suggestions are always for a movie that should be here instead of it.