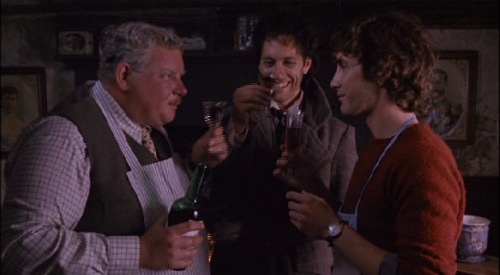 There’s always been two great things about Laurel and Hardy – simplicity and extrapolation – and their most delightful adventure involved simply getting drunker and drunker. Having retreated to the mountains of the good living as an aid to Ollie’s gout, they happen upon a well of fresh water. Little do they know that bootleggers have just offloaded their hooch down said well. The more they drink, the better they feel, proving that what is held to be good for you can have exactly the opposite effect. The extrapolation comes in the form of a couple – he goes for petrol, she gets pissed with the boys. The perfect way to demonstrate the power of the joke taken to the max, with everyone singing the pom pom.

While many actors have been drunk, it’s a much harder to deal to act being drunk. As rich unhappy Arthur Bach, Moore finally broke the chains that tied Peter Cook – ironically, many read his portrayal as a parody of Cook himself, often know to have the odd snifter. Taken as a bit of irony or just taken as damn funny in its own right, it’s hard to beat Moore’s comedy pratfuls as he falls out of the car, or opening where Arthur takes a hooker to dinner, a scene that contains more gags than most movies manage in total (“You’re the only woman.. at this table”), and the wit we all would love to have (and often we thing we do) on a bit night out.

Home to a drinking game – though it has to be said that by the time the titular ‘hero’ hits the anti-freeze, it’s probably time to back down. Tee-totaller Richard E. Grant does an incomparable job of making modern cinema’s finest drunk both extremely good company and really rather sad. For all the wonderful lines (“We want the finest wines available to humanity, and we want them now”), Withnail ends up without his ‘I’, alone, in search of a drink. Comedy and tragedy, as his final Shakespeare moment proves, are really not that far apart.

So, if you succumb to the increasingly popular notion that Walt Disney was a Nazi-loving, McCarthy-backing ultra-conservative weirdo, what were his intentions behind getting a jug-eared elephant lagered? This is what he did in Dumbo, in which our heroic little one (separated from his mother.. . Disney obviously had a mother complex) inadvertently drinks the clowns’ booze and invents psychedelia. Imagine watching the pink elephants on parade during the 1960s reissue. Walt was – in every sense – clearly a headcase.

“She was a girl. He was a boy. Could it be any more obvious?” Okay, so you have to be a factor in the little alien chap and a six-pack of coors, but you get the idea. When E.T. – cute chap with the eyes of Einstein and not much of a body – found himself stranded on Earth, he did all the logical things: went trick-or-treating and hit the fridge. A couple of beers later and he was even legless than he was to begin with. Unfortunately, his psychically connected boy pal Elliot also felt the suds; still, it got him out of science class and won him a quick, life-affirming snog with the girl from Baywatch. All of it was a homage to John Ford’s finest, The Quiet Man.

Legend has it that Spielberg went the obvious route for the classic scene in which his three seafaring shark hunters (police cheif Brody, marine biologist Hooper and fisherman Quint) take a wee dream or two, by taking his actors out to sea and getting them slaughtered. Thus Scheider; Dreyfuss and shaw are remarkably convincing as three men comparing emotional and physical scar tissue, never more so than Dreyfuss drunkedly pulls down his top and reveals “Mary Ellen Moffat, she broke my heart” – surely he hasn’t been this pissed since he ‘quit’ (sic) the West End run of The Producers!

Just to prove that being drunk doesn’t make you a fool, Jimmy Stewart took the role of Elwood P. Dowd – friend to a potentially imaginary rabbit – from Broadway success to Oscar glory. His disgnity manifest, but the license of the poetic is never felt more strongly than in the scene where he quietly relates his first meeting with eponymous Harvey. As Stewart says in one most of his most heartfelt performances: “I’ve wasted with rreality for 35 years, doctor, and I’m happy to state I finally won out over it.” Drunks can be boorish, rude and obnoxious – in Stewart’s hand they become eloquent.

For anyone that’s followed Nic Cage’s career, the idea of him playing out-there guy who decides to end it all via booze surely didn’t come as any surprise. Not to say that he has a fondness for the bottle – it’s just his fondness for the ‘out-there’. Here he essayed a low-sunk scriptwriter who decides to end it all via the bottom of the glass – several actually. His supermarket shopping spree, at times reminiscent of a Dale Winton contestant in the drinks aisle, is the highlight of Mike Figgis’ finest film. Here is the sight of a man singing his own suicide note through purchase.

It’s very likely Gene Wilder, as the Waco Kid, was channelling Dean Martin in Rio Bravo. He’s the one-time gun man with the rep, drying out in the town jail after slugging down a whole bottle of whisky in one gulp. What Wilder gets brilliantly is the feeling of the sobered-up drink who knows he’s going back to the bottle later – after all, one hand is rock solid, but the other (“That’s shooting hand”) is all over the shop. Just to top it off he delivers a brilliant monologue on the plight of the gunfighter. Give that man a drink.

The movies’ first real shot at the reality of alcoholism – courtesy of director Billy Wilder – follows Ray Milland as he absconds from sober weekend away to go on a four-day bender that takes him fully to the edge and almost over it. His darkest moment comes in a sequence of still-disturbing images that represent the DTs, emphasised by composer Miklos Rozsa’s use of theremin (later a sci-fi staple, here used on film for the first time) Milland deservedly won an Oscar, as a did Wilder, who later claimed the US liquor industry offered the studio $5 million NOT to release the picture.