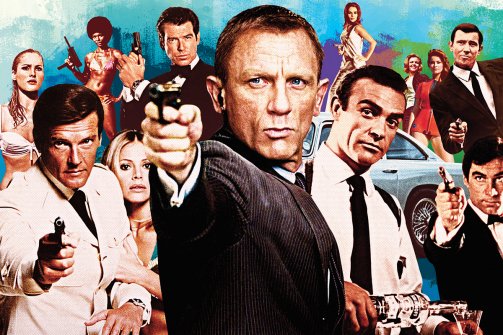 1. You Only Live Twice
OK, this signalled the beginning of the end for Connery in the franchise but…what more could you want in a Bond film? It’s got Blofeld, ninjas, spaceships, the threat of World War Three, Little Nellie, a secret base in a volcano, a multi-coloured jumpsuit wearing SPECTRE army, man eating piranhas – the list goes on. The Ken Adam designed set was reputedly the largest ever made and housed Blofeld’s monorail, helipad and control centre – it’s jaw dropping. The Roald Dahl screenplay moves along at a terrific pace and contributes to what is, in my opinion, as perfect an example of a Bond film as you could see.

2. Casino Royale
The first of the Daniel Craig films and one that really injected a hefty dose of realism and grittiness to the franchise. Less emphasis on the gadgets and more on Bond as a real man with real failings brought Casino Royale closer to the one imagined by Ian Fleming. Signalled the start of a new and exciting era for James Bond.

3. From Russia With Love
A great film by any standards and reputedly one of JFK’s favourite novels, From Russia With Love set out the basic formula that future Bond films stuck to. The villainous Rosa Klebb is the SPECTRE agent setting the honey trap (superbly played by Daniela Bianchi as Soviet agent Tatiana Romanova) intended to kill 007. Who else but James Bond could guess another British agent wasn’t who he said he was, simply by ordering red wine with fish?

4. Goldfinger
An immensely popular film (it took close to US$125 million at the box office) with a superbly over the top villain in Auric Goldfinger. More screentime was devoted to Q and the gadgets, none more impressive than the first appearance of the DB5 and the laser that almost slices Bond into two. Oddjob makes his appearance as the killer-hat wielding muscle. Sadly, Ian Fleming died before seeing the 1964 release of Goldfinger.

5. Live And Let Die
Roger Moore’s first appearance as 007 and the scene is set in some of the more exotic locations – San Monique, Louisiana and umm…..Harlem. Jane Seymour plays one of the more memorable Bond girls in the tarot reading Solitaire and Moore plays the role right – serious but with lighter touches where needed. Blaxploitation Bond with Paul McCartney delivering possibly the best title song in the series.

6. Skyfall
The latest film is the third outing for Daniel Craig and a relief to those who were disappointed with the frankly average at best Quantum Of Solace. Skyfall fleshes out the Bond character and brings him to life like none of the earlier films managed. Like Casino Royale, there’s less emphasis on the innuendo and gadgets catered for by the Moore era and Javier Bardem superbly plays a deranged and vengeful ex-MI6 operative.

7. Dr No
The first ever Bond film and it’s stood the test of time well. Connery eases himself into the role and must have been delighted to be paired with Ursula Andress as Honey Ryder (is there anyone who HASN’T seen the iconic scene where the two meet collecting shells?). It’s 007’s first run in with SPECTRE and a fantastic blend of action, intrigue, fight sequences and explosions.

8. Goldeneye
Another 007 debut, this time for Pierce Brosnan. A dynamic and crowd pleasing film, it follows Bond’s efforts to track down the Goldeneye controls from the Russian mafia, hell bent on stealing from the Bank of England. Goldeneye has possibly the best named Bond Girl (Xenia Onatopp anyone?) and a decent villain’s performance from Sean Bean as the head of the evil Janus syndicate.

9. On Her Majesty’s Secret Service
George Lazenby’s only appearance as Bond certainly divided the public’s opinion. I think Lazenby played it well and together with the right blend of humour and well written script progress the film well. Telly Savalas (“who loves ya baby!”) plays an altogether different kind of Blofeld, naturally escaping at the end to strike back at Bond in a most heinous way. One of the Bond films that certainly shouldn’t be dismissed.

10. Thunderball
Sean Connery in his fourth outing as 007 – again he’s up against SPECTRE and again it’s with the help of his old buddy Felix Leiter from the CIA. The film plays on Cold War fears with the threat of atomic bombs being used to extort the British Government out of £100,000,000 (small change these days eh?). Connery plays to type and the film follows the Bond template but it’s superbly orchestrated with underwater backdrops and beautiful scenery.