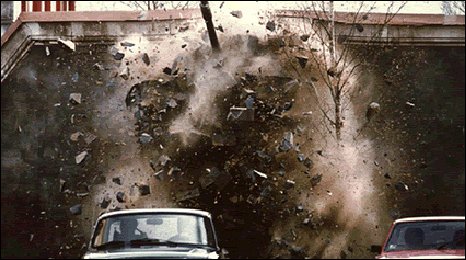 One of the greatest Car Chase scene you will ever see. If you haven’t seen this scene, watch it right now. It’s so intense!

What a car chase scene! I hear the director saw Bullet and said that he would never attempt to create a better car chase scene in his life. The end result of this policy in The French Connection is a car chase involving a car against a train!

People will argue that it isn’t a car chase, but then is The French Connection strictly a car chase? If  trains qualify, why can’t a tank count, especially if it is chasing a car?

4. Duel
This movie is so good and so few people have seen it. If you are one of the lucky ones, you know why this takes fourth place on our car chase movie list.

5. Terminator 2: Judgment Day
There is one great car chase in this movie. Some might say two! My favourite is when you think they’ve lost the T1000 and suddenly BOOM, straight over the bridge, with the determination of a German on speed!

6. Vanishing Point
“This movie is a car chase.” Not my words, some guy on Twitter said that.

7. Ronin
This movie is carried by the car chase. Take that out and you have the most boring hour and a half of your life.

8. The Bourne Identity
An ad for Minis worldwide. There is nothing Bourne can’t do in car.

9. Mad Max II: The Road Warrior
A dystopic take on car chases but still a good one!

10. Blues Brothers
60 police cars were destroyed in this movie. A Piece of trivia for you.

One thought on “Car Chase”