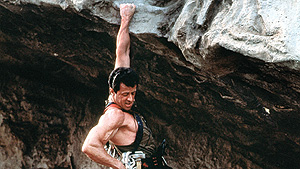 When I was little, I loved to imagine action-movie sequences set in wild, exotic locations. “What if you had a fight scene in a castle? A blimp? An airplane wing?” Cliffhanger is the comprehensive answer to “What if you had a fight on a mountain peak?” The real star of this movie is the mountain range, exploited to the max as an action-scene locale. Most critics isolate the opening reel and the plane hijacking as the standout sequences, but to me, the best scene in the film is the breathless fistfight where Sylvester Stallone and a thug tumble down a sheet of ice toward a cliff face.

Too original to be a proper Die Hard knockoff, yet too heavy on ‘90s action tropes to be considered anything else, Speed is a fast, fun movie that sandwiches a rollicking bus ride in between two spectacular setpieces on an elevator and subway. The eccentric assortment of characters on the bomb-target bus recalls ‘70s disaster movies, and Jan De Bont demonstrates considerable skill at cooking up and executing stunts and action for the speeding bus. Best of all, the movie clocks in at under two hours, resisting the temptation for bloatedness that has befallen so many action blockbusters since.

Air Force One is essentially 24: The Movie avant la lettre: shifting villains, a final act that takes the premise to the breaking point, moles and betrayals, political prisoners, excessive violence, an action-oriented president, a constitutional crisis, surprising deaths, dissension in the presidential cabinet… the list goes on. However, 24 never had the benefit of such a neat, compact two-hour format, meaning forerunner Air Force One is superiorly paced and written.

The Star Trek franchise experienced warp core meltdown once the original crew departed and TNG took over, but Picard and co. did contribute one watchable entry when they battled the mechanistic Borg. The pastoral opening theme, evoking bucolic countrysides and lakes, belies the dark guerrilla warfare to follow. At times, the film seems unsure whether it wants to completely jettison Star Trek’s usual heavy-handed focus on “ideas” and become a pure action movie, a genre ill-suited to the Next Generation cast. The ideas are fitfully interesting (Picard as Ahab, the expectations of history, the nature of individuality, et cetera) and the action engaging (a hand-to-hand battle on the hull of the spaceship), yet it’s Patrick Stewart’s intense performance as an unusually explosive Picard that lingers in one’s memory. He may not resemble the measured, cultivated captain of the TV show, but when he captivates with breathless rants like “The line must be drawn he-yuh”, you won’t mind.

Loud, blatty and overblown, The Rock is a patchwork film that should be awful but somehow maintains very solid entertainment value. The script works surprisingly hard to make Ed Harris’s villain a complex, motivated baddie, but even this commendable effort essentially drowns in the excess of Michael Bay’s flashy directorial style. The thumping music from Hans Zimmer and associates boasts some catchy melodies but no overall arc or flow, deadening the impact of the movie’s dramatic beats. Worse still, the San Francisco Humvee chase is as close to completely pointless as any action setpiece from the last 20 years –cars crash and rumble with proto-Fast Five fury as the plot patiently waits to resume. Nevertheless, the movie adds up to more than the sums of its parts, largely thanks to the oddball chemistry of Nicholas Cage and Sean Connery.

A cheat? Maybe, but Die Hard 2 is the only Die Hard sequel to copy the original’s premise. This time, John McClane battles terrorists in an airport with considerably less entertaining results, yet the movie’s mixed reputation series actually lends it certain freshness upon second or third viewing. Unlike later installments, this Die Hard does not pull punches in terms of violence, fully embracing the R rating and all its associated mayhem: plane crashes, throat slittings, senior-citizen executions, scores of dead innocents. At the very least, director Renny Harlin is giving us as many bonecrushing reminders of the premise’s brutality as the framework of a mainstream action film will allow. Appropriately, the terrorists are physically intimidating, but they lack the (sorely missed) urbane villainy of Alan Rickman’s original Die Hard villain.

Steven Seagal’s physical presence and the authentic feel of the naval environment are the main draw of “Die Hard on a Boat.” Alas, Seagal, superb in the action sequences, flounders badly whenever he’s required to emote, meaning Under Siege is often campy when it needs to be compelling. Stay tuned until the end, though – Seagal and Tommy Lee Jones finish the film with a knife fight, a nice counterprogramming touch that sets the film’s finale apart from the usual fisticuffs and gun battles.

Executive Decision combines the basic premise of the old Airport series with the sneak-around action of Die Hard. The cliché cocktail does little to mitigate the been-there, done-that feel, but the film does twitch to life during the dramatic Remora sequence, complete with a surprising send-off for Steven Seagal and throbbing Jerry Goldsmith rhythms to accent all the thrills. David Suchet, given a rare chance to shine in a featured Hollywood role, is a fun villain, though it’s unfortunate his character doesn’t get an opportunity for a classic mano-a-mano battle with hero Kurt Russell.

It’s Black Sunday meets Die Hard! Jean-Claude Van Damme’s contribution to the genre manages to generate only one or two thrill-worthy moments within the hackneyed premise of terrorists taking over a hockey arena. The impact of the over-the-top kitchen fight is diluted by its similarity to Family Guy’s chicken-fight spoofs, but it’s still a sharply choreographed sequence that darkly illustrates just how dangerous a kitchen can be. Oddly enough, the most inspired moment is not an action sequence at all: Van Damme pretends to be a team’s goalie and must face a critical game-saving shot.

Everett McGill’s laconic thug offers this memorable piece of hired-gun wisdom: “Assumption is the mother of all fuckups.” Assuming this movie has anything of interest to offer would also be an egregious error. Terrorists seize a train, Steven Seagal’s Casey Ryback intervenes, and the audience yawns. This movie’s presence on this list indicates how thin the pool of watchable Die Hard rip-offs is. Eric Bogosian’s flamboyant villain is the sole highlight.

One thought on “Die Hard Ripoffs”