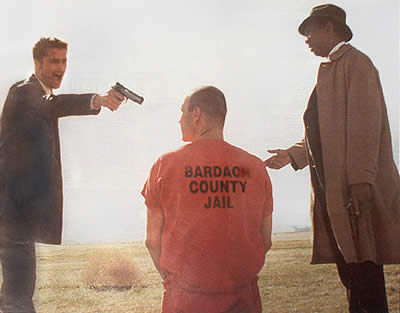 1. Silence of The Lambs

Clarice has definitely come a long way from fumbling in the seats of cars. What makes the best FBI movies? We’ll it’s essential that you have a pure evil bad, bad, guy. Silence of the lambs has this in abundance (by abudance, I mean two bad guys).

One of the greatest casts every essembled in a movie. This movie should arguably be number 1 in our FBI movies list.

Okay, my friend Max pointed out that the Fugitive is an FBI movie. It has an FBI officer in it, (Robert Downey Jr or Tony Stark) but he’s not a main character is he? Anyway, The Fugitive is a great movie and can always be appreciated. It never ages and neither do the actor in it… seriously Tommy Lee(not the drummer) and Harrison Ford look the exact same age today.

Don’t fuck with Gene Hackman, did you not see “The French Connection”, you Hill  Billy f^cks?

Okay, there was no excuse for me forgetting to put this movie on the original list. I guess it shows that I’m not infallible, I’m sorry to disappoint. It’s such a guys movie but wait, it’s directed by a girl. I bet you a Tenner that at night, during the production of the movie, Bigelow would get hints off her husband, James Cameron. Maybe in return she performed sexual favours on him, who knows the full story.

Arguable one of the best prequels of all time, (don’t get excited, most prequels are sh^t). This movie has a great cast, Edward Norton, Anthony Hopkins, Harvey Keitel, Emily Watson and Ralph Fiennes (the guy in “In Bruge”). The dialogue between Anthony and Edward Norton is great! Especially the below dialogue!

Great comedy, similar to The Commitments, The Van & The Snapper. I’ll have to revisit my “Top 10 Irish Movies” now, as it’s bloody brilliant and isn’t currently on the list. I loved it and you will too, so watch it Focker!

“I took his Face Off”, great dialogue and you’d expect no less from the dream team of John Woo and Nicolas Cage. Certainly better than their later attempt at a movie, “Windtalkers”. This is a great movie to watch when you’re hung over or sick.

9. Donnie Brasco
This is a three out of five movie, i think. Imagine comparing it to “The Godfather”, “Goodfellas” or “Scar Face”… I could go on but you get the idea. It’s not that it’s a bad movie, it’s just that the category it is in, is very competitive.

Fun, easy going movie about the IRA. It’s not totally anti-IRA, which is interesting. Definately an FBI movie if I’ve ever seen it.

I watch this the other day and it’s not a good as the first one. I actually watched it straight after Patriot Games, an FBI movie double bill b*tch! The sniper scene in this movie, while is is cool in a way, seems pointless really. Think about it! Also, I’m surprised this movie even makes the list, there isn’t really that many good real FBI movies around.

I used love the X Files when I was younger. I remember my parents bought me every book about the X Files ever written, in an attempt to get me away from the TV for a few minutes a day and start reading. Unfortunately my spelling and grammar  is still terrible, (as you can see). However, I hate to imagine how bad it would be without me having read the X files chronicles.

Great movie and Al Pacino plays a convincing gay man. A little dark and arguably not as FBI related as some of the other on our list.

Catch Me If You Can

This should really make the list, what do you guys think?