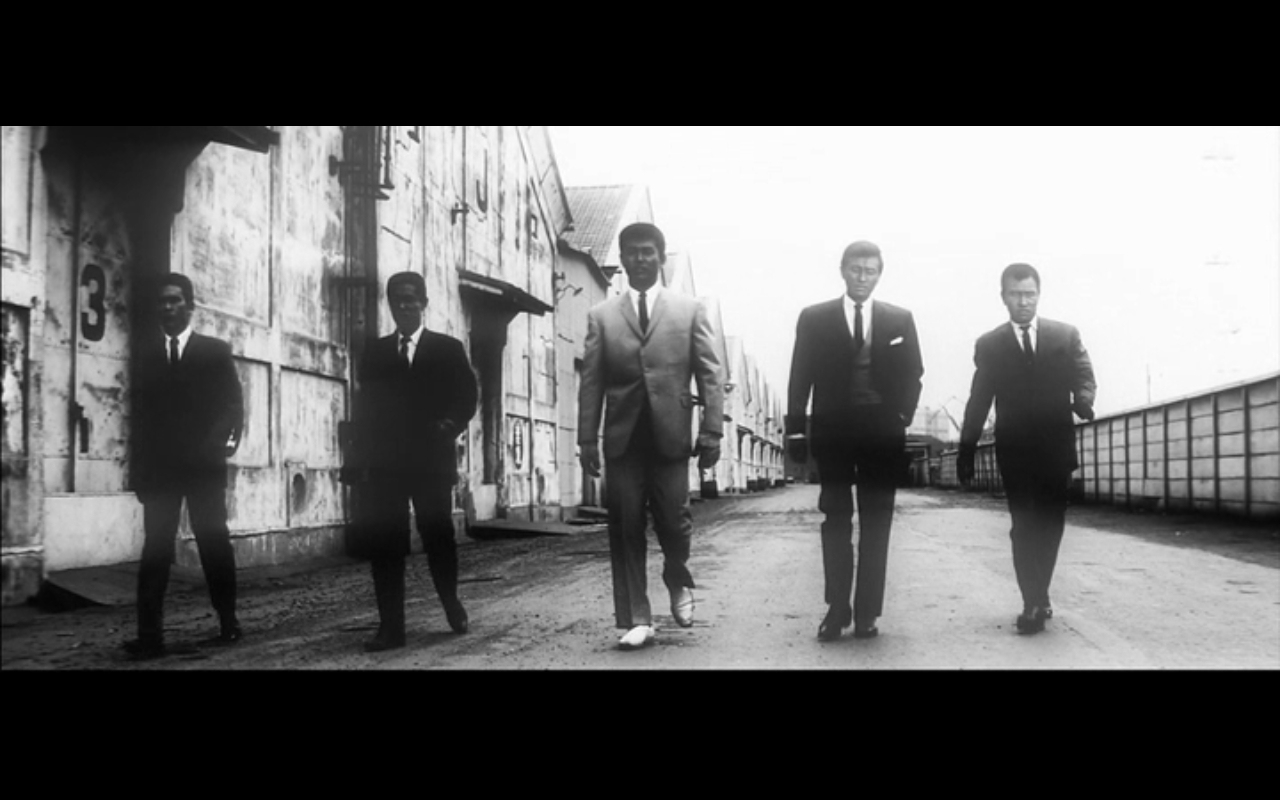 From Ninkyo to Nihilist: The Changing Representation of Family and Tradition in Yakuza Films

In the course of the last six decades, depictions of the infamous Yakuza[1] gangs in TV programmes and films have become one of the most prominent themes in Japanese popular culture. Beginning in the post-war period, the films, which create fictional representations of this gangster lifestyle, still remain extremely popular today. Their success, I will argue, is in a large part due to the fact that the genre, created in the uncertain times of post-war Japan, presented the concepts of ‘tradition’ and ‘family’ as the quintessential components of not only Japanese society, but also of the Japanese way of life. In stressing these characteristics, the proponents of the Yakuza genre highlighted the qualities that differentiated Japanese culture from the Western influences flooding the country in the wake of the Second World War. These differences appealed to a society struggling to resist the dominance of Western values during the subsequent occupation of Japan by Allied forces. 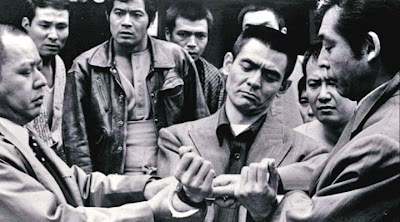 In the early 1960s Japan signed the US-Japan Security Treaty. The treaty further compromised Japanese independence[2] and large-scale student demonstrations were seen throughout Japan.[3] This imposition of Western control over a country that had famously managed to resist it for several centuries brought great shame to a once-proud nation. As one of the famous Japanese Yakuza directors of the time, Junya Satō, said:

As the 1960s progressed, there were more and more students’ demonstrations. Many young people thought that the Yakuza film characters were almost like student leaders, fighting the system against impossible odds. They took them quite seriously–both students on the left and the right. And they felt deep empathy for the characters when they would die at the end. There was the aesthetic, too, that saw a terrible beauty in dying this way. In these films, the only way left to make a change in the system is through violence. But the majority of the audience for Yakuza films were blue-collar workers who felt virtually at war with the faceless, white-collar, corporate bosses. No one felt they had a system they could depend on. Everyone identified with the individual hero or anti-hero going up against the system.[4] 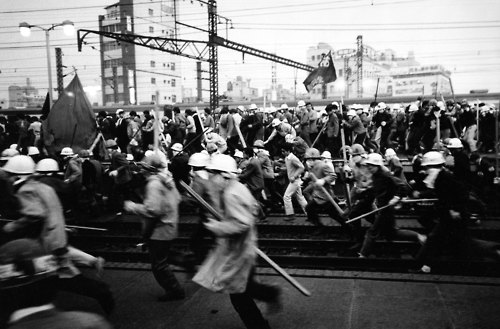 The early Yakuza movies of the 1960s re-situated elements of the Samurai ethical code within the modern gangster setting. They thus translated known components of distinctiveness, which stood for and symbolised the importance of tradition, into a contemporary setting.[5] In The Waves at Genji’s Door: Japan Through Its Cinema,[6] Joan Mellen describes how the Yakuza movies of the 1960s proposed a return to the values of the past; sacrificial death is a badge of honour and is only a tiny price for men to pay should they be successful in restoring the code of bushido.[7] The popularity of the genre shows the extent to which bushido still lives on in Japanese culture. The Yakuza are often seen as representing a heroic last stand in the fight against the Western influences that have destroyed traditional Japanese culture.[8] These Yakuza movies of the 1960s became known as Ninkyo-Eiga, or ‘chivalry films’.[9]

The Ninkyo films of the 1960s reflected this generational struggle back to the audience. The criminal – the man outside society, just as Japan stood outside Western ideology – became the last real believer of true Japanese values and traditions. Always uncompromising in their beliefs, the Yakuza are portrayed as men of principle in a world fast becoming more and more Westernised. They engage in battle, often to the death, with the new society imposed upon them.[10] In the Ninkyo films, the Yakuza, unlike the Samurai, receive no social recognition for their impossible task of fighting Westernisation and upholding tradition. They are criminals after all. The area where appreciation is shown instead is amongst their blood brothers and their oyabun (boss). Their aim becomes the preservation and strengthening of the gang which is presented as a tightly knit ‘family’ where loyalty and honour are valued above all else.

In Paul Schrader’s article in the 1974 issue of Film Comment, he talks about the Ninkyo films of the 1960s and how, just as the western helped “codify a morality of the frontier” in the US, the Yakuza helped the young public deal with the “new social forces of the city”. Schrader sees the Yakuza genre serving as “a moral battleground – a genre in which the traditional virtues of duty and humanity can fight to the death.”[11] To this younger generation, the acts of rebellion, the resistance and, most importantly, the idea of creating your own chosen family unit from amongst your contemporaries, would hold equal appeal.

By the 1970s, however, a new generation began to appear. Their hopes of independence from the US were dashed with the re-signing of the

in 1970, despite widespread protest. These young people had not grown up in war-torn Japan. They had not been instilled with the same moral training as generations before, nor had they been ruled with absolute power by a dictator/emperor. They had left the land for jobs in the new factories where they worked hard, but also had a disposable income.[12] They became known as the Shinjinrui, and it was this generation that showed for the first time in Japan’s history a pattern of hedonism and consumerism. They began to accept and embrace the Westernisation sweeping Japan to a degree more than any previous generation before them. Western products were preferred over Japanese products, which created a flood of Western manufacturers into the country.[13]

Herbig and Borstorff, discussing the Shinjinrui generation of the 1970s, note that

A growing number of young people are insisting on leading their lives as they please and refusing to conform to (in their opinion) outdated and previously unquestioned traditional norms. This perception threatens their elders, who fear a loss of control as the young’s new values may replace the traditional values and destroy the quintessential Japanese cultural qualities.[14]

This generation wanted a new type of Yakuza film that helped reflect the times. Ian Buruma talks about how the myths and symbols associated with the 1960s Ninkyo hero were smashed by the new Yakuza genre Jitsuroku-Eiga[15] (true document films): “In this world everybody, including the hero, plays dirty. The old ceremonies, for which Tsurata [a famous Yakuza film star from the 1960s] lived and died, are almost forgotten.”[16]

A newer subgenre emerged, which struck somewhat closer to reality. This was the Jitsuroku Eiga (true document films), in contrast to the more orthodox Ninkyo Eiga (chivalry films). In this later group, there is less honor and more treachery, less swordplay and more gunfire.[17]

To the older generation of the 1960s, the fight to attempt to restore Japan to what it once was before industrialisation held great appeal; however, this generation resigned itself to never restoring traditional Japan.

In the following chapters I will dissect two films: Tokyo Drifter from 1966, and Battle Without Honor or Humanity from 1974. In the first chapter I discuss Tokyo Drifter as an example of a Ninkyo film of the 1960s, where the hero battles with duty, giri and compassion, ninjo, as the Samurai did in films made before the 1960s. I will look closely at the representation of both ‘family’ and ‘tradition’. I will then examine Battle without Honor or Humanity as an example of a Jitsuroku film, looking specifically at how it represents “family” and “tradition” in an alternative and negative light. Finally, I will show how a character devoid of the traditional Samurai attributes of giri and ninjo becomes the nihilistic character created in the Jitsuroku films of the 1970s. This is the nihilistic hero we see in today’s Yakuza films by directors such as Takashi Miike and Takeshi Kitano. I will show that this nihilistic character maintains a fundamental cultural difference between Japan and the West.
This character helps define the Yakuza film just as the Ninkyo character did in the 1960s. It is this nihilistic character we see in the Yakuza on our screens today. While these new Yakuza characters might not resemble the traditional Ninkyo characters, the nihilist character is also very much traditional to Japan. 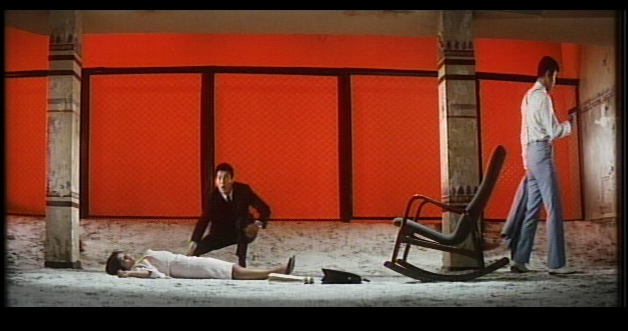 In summary, then, the argument of my thesis will be that tradition and family are initially portrayed as positive elements in the Ninkyo films of the 1960s; in the 1970s, however, the genre mutates as the concepts of ‘tradition’ and ‘family’ decay and become presented in a negative light; and finally, in the wake of these once-key themes, the genre moves towards violent nihilism. However, even in this nihilistic response to the loss of tradition, I will argue, there are still traces of deeper Japanese tradition being preserved.

[1] The word “Yakuza” means literally “8-9-3”: ya for yattsu, eight, ku for nine and za for san, three. This added up is the worst score in a card game called oichokabu. They were originally believed to be the defenders of the town against ronin (masterless Samurai) who made a living from looting during the Tokugawa era (1603 to 1868). In the modern day they are members of an organised crime syndicate in Japan. There is believed to be over 87,000 active members in the various clans that make up the organisation to date. There are many different groups but together they form the largest organised crime group in the world.

[2] The treaty forced Japan to provide the U.S. military with installations around Japan, in what the U.S. claimed was an attempt to provide security for Japan and the “Far East”.

[3] Interestingly, students protesting during the 1960s often carried pictures of Takakura Ken (a famous Yakuza actor at the time), emphasising how the genre related to the discontent of the people of the time.

[6] “In response to the moral vacuum they perceive in modern Japan, the Yakuza films propose a return to the values of the past, particularly to those of the Samurai culture that sustained itself by absolutes”, Mellen, The Waves at Genji’s Door, p. 122.

[7] Bushidō (Way of the Warrior) describes a code of conduct that Samurai adhered to. The code emphasises virtues such as honour, duty, self-sacrifice and loyalty. s.v. “Bushidō”, Encyclopædia Britannica, 2010, <http://www.britannica.com/EBchecked/topic/86168/Bushido>.

[9] Ninkyo–Eiga or ‘chivalry films’ were the very first type of Yakuza films. Most of them were produced by the same Toei studio in the 1960s in Japan. The hero of these films was generally an extremely honourable outlaw torn between giri (duty to his oyabun) and ninjo (his own personal feelings).

[10] This view of the role of Yakuza during the 1960s in popular culture is shared by Joan Mellen, Ian Buruma and Mark Schilling. As Schilling puts it: “The heroes of this genre were spiritual descendants of the silent-era gamblers who upheld traditional values while slicing through crowds of opponents with swift, deadly swords. Their enemies, however, were not only the usual bad gangsters who flouted the gang code but also their corrupt allies in business, government, and the military.” Schilling, The Yakuza Movie Book, p. 13.

[15] In the 1970s a new type of yakuza film was created called jitsuroku films. Many jitsuroku films were based around true stories and generally filmed in a documentary style, in some ways similar to cinema verite. The genre was popularized by Kinji Fukasaku’s epic Battles Without Honor and Humanity. The genre portrays the yakuza as no longer the upholders of the samurai code but instead evil, ruthless thugs.