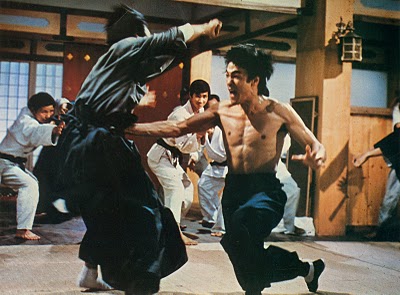 Let’s preface this list with a warning. Do NOT under any circumstances watch these films with the English dubs, they completely ruin the films. The ONLY acceptable way to watch these is with the original language dubbing and English subtitles. Even though most Hong Kong films up until the mid 90’s were shot without sound (hence the classic Hong Kong over the top sounds), the original dubs at least keep a sense of story and realism, where as the English dubs lack any subtlety or nuance, and generally appear to have been written out by someone whose only knowledge of English is bad straight to video action films.

Brought to you by a complete lack of insurance and western safety standards, it’s the film that demonstrated that not only could Jackie Chan do fantastic martial arts moves, he could perform stunts that most professional stuntmen would look at as insanity. If you have never seen the bus scene, or the ending where Jackie jumps down a massive lighting rig (a stunt which gave him second degree burns, a dislocated pelvis and a back injury), then you are missing out. You even get to hear Jackie singing the theme tune, you don’t get that from Dwayne Johnson. Apparently the crew nicknamed it “Glass Story” because of how much sugar glass was broken.

Not very interestingly, I’ve actually been to the village where Jackie is posted part way through the film. The police station didn’t appear to have any martial arts superstars eating noodles, I was quietly disappointed.

A low budget movie made by director Wong Kar Wai (also director of the brilliant In the Mood for Love) between the shooting of two other films, Chungking Express manages to capture so much of the atmosphere, soul and madness of Hong Kong. A film that is more about the characters and the location than the story, there’s a set of stories there, but it’s hard not to get swept away with the characters. Based largely around the Chungking Mansions, a real and massive building which is a hodge-podge of flats, low low low budget hotels, Indian restaurants, shops and dodgy Triad types, I totally expect that by the time it finishes you will be eating pineapple rings and singing California Dreaming over and over again.

Mr Twin Gun Diving Jump (John Woo) directs Chow Yun Fat in what is arguably the best film either of them has ever made. A story of a criminal attempting to reform with a younger brother in the police force, A Better Tomorrow is full of action, alongside a story that really drags you along. Chow Yun Fat was cast even though his past films had flopped, and was supposedly known as box-office poison, but after this he became an instant film star in Asia. This film got kids all over Hong Kong to dress up in long trench coats and dark shades over a decade before the Matrix brought that affliction to the west, frankly Brother Mark makes Neo look like a bit of a wuss.

A police mole and undercover cop seek to find each other out, but Infernal Affairs is so much more detailed and subtle than that might suggest. Remade as the also fantastic The Departed, this is the kind of thriller that will keep you guessing, and once it has finished will leave you thinking. Andy Lau and Tony Leung are both excellent too.

I was worried about getting to the end of this list without featuring the excellent Sammo Hung, but no need as he appears alongside Jackie Chan in this masterpiece of martial arts film-making. Some of the most inventive and entertaining stunts you will ever see, combined with the usual top quality martial artistry (Jackie and Sammo are always a great combination). The story of a coastguard who hunts down some particularly nasty pirates, the story and period setting roll along nicely setting the scene for the action. Often argued to be Jackie Chan’s finest film, it’s almost certainly one of the finest movies ever to come out of Hong Kong.

My previous point about American dubbing being terrible also applies to trailers, hence why this trailer is the original Cantonese one…

The film that made Jackie Chan a star. I bet most people in the west don’t realise that the character played in this film is the same one played by Jet Li in Once Upon a Time in China and Fearless, the legendary Wong Fei-Hung. Even though supposedly Wong never did drunken boxing, who cares when you have a film as well choreographed as this? Great action, an enjoyable cast and story, and a real sense that you are watching a star being born. Sure it has all the 70’s Hong Kong movies hallmarks of low budget, slightly iffy acting and silly sound effects, but once you get past the first few minutes it draws you in.

Yet another terrible US dubbed trailer, hence a clip instead of Wong Fei-Hung in training.

What is there to say about Fist of Fury? It’s Bruce Lee at his best, that’s all you need to know.

Forget Jet Li, Jackie Chan and even Bruce Lee; the original heroes and masters of Hong Kong cinema were the Shaw Brothers, producers of films for over fifty years, and creators of a film dynasty that still leaves its mark over Hong Kong cinema. Those crazy low budget films that people would have on worn out VHS, or on poor quality VCD rips, the Shaw Brothers classics were for many years completely unavailable in the west. Don’t let the low budget nature of these films fool you into thinking they aren’t very good though, their films have consistent quality, and even the weaker ones contain great action. This however is arguably the best film they ever produced, and has even been called the best kung-fu movie of all time, and for good reason. Gordon Liu is magnificent, and this film brings to life the Shaolin way more vividly than any other film.

9. Once Upon a Time in China

The legendary Wong Fei-Hung makes his second appearance in a film that contains perhaps the best fight scenes that Jet Li has ever produced (The Legend of Fong Sai Yuk is also excellent though). The story of the legendary warrior fighting back against forces both foreign and Chinese who are decimating China. A story with more depth and complexity than your average martial arts movie, this is well worth a watch if you find most martial arts films to be too one dimensional.

Possibly the funniest kung-fu movie in many years, and achieving the remarkable feat of combining martial arts with football. Stephen Chow manages real belly laughs as well as some incredible action, all without the film taking itself too seriously. An ex-football player becomes a bum after his career ends badly, he meets a shaolin kung-fu master and together they bring the art form into the beautiful game. It might not sound like a great premise for a film, but trust me on this one, it works a treat. With opponents called Team Evil and a female team called Team Moustache, this is up there with Dodgeball for insanely brilliant sports comedy. Is this the best sports film of all time? Very Possibly, it’s definitely top ten.

One thought on “Hong Kong Movies”