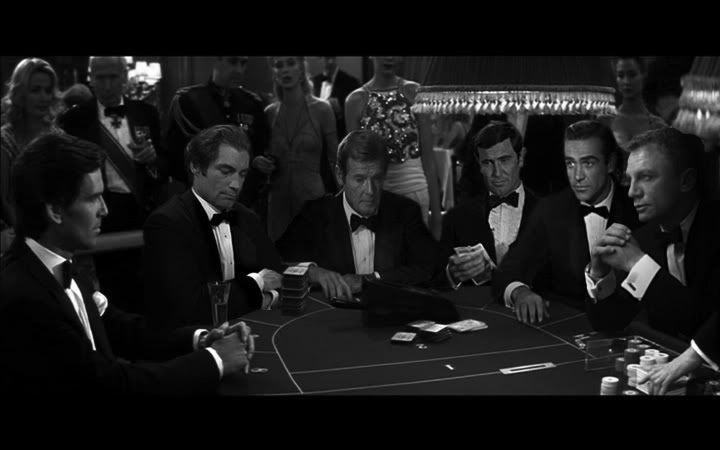 This post was created by Journey Myers. No living man knows more bout James Bond than him, (maybe Fleming but he’s dead, so my point still stands).

If you somehow find someone who has never seen a James Bond film and knows nothing about them, plop them down in front of the TV with a Blu-ray copy of this film. Two hours later, they’ll get it . . . spectacular locations and stunts, improbable gadgets, a madman’s scheme of mass destruction, a clear fetish for British imperialism, and of course, debonair Bond himself. Roger Moore, the finest of the Bonds, is at the peak of his game here. The worry lines, crow’s feet, and paunch that diminished his later performances are nowhere to be seen. He’s lean, fast, witty and impossibly cool. Nobody has ever saved the world with more style – or apparent ease – and for once, the film that surrounds him is also an unqualified success.

It’s a throwback to the era of Bond relying strictly on his wits, yet it’s also a dramatic step forward, with complicated characters, streamlined action, and scenes of juicy dialogue. It’s the first 007 entry ever helmed by an Academy Award-winning director (Sam Mendes), and it shows. This is a Bond that can live two lives: one as a towering addition to the Bond canon, and one as a satisfying, entertaining standalone film.

This film has the feel of a thought experiment that suddenly, inexplicably becomes reality: “What if the Bond movies had been rigorously faithful to the original books?”  The book Casino Royale is placed, largely intact, in the middle of this dramatic reboot of the Bond series, and the result is a film far better than any escapist actioner has any right to be. I rate it slightly lower than Skyfall because of a few flaws – the turn in Bond’s relationship with Vesper is easy to see coming, Daniel Craig cannot sell the authenticity of the “everyone has a tell but you” line, and the false endings approach Return of the King annoyance levels.

Bond became the ace of sang-froid in this film and has rarely looked back since. Remember his neurotic reaction to the spider in Dr. No, when he repeatedly pounds the creature into the floor with his shoe before rushing to the bathroom to vomit? That nervy Bond is left behind in favor of Connery’s lithe master of cool, locking in place the quipping, seducing, fighting polymath we all know and love. Even when Goldfinger’s laser is inching toward Bond’s torso, he seems only mildly concerned. The character is marginalized in the film’s third act, but it hardly seems to matter. Goldfinger may not be the best Bond film, but it’s certainly the most important, establishing both the formula and the implacable essence of the 007 character.

Bond gets married. Well, we can all imagine how that’s going to end up. The fatalistic, downbeat feel sets OHMSS apart from any Bond prior to Casino Royale, but the up-tempo action (edited for the final time with the energetic, jump-cut style of Peter Hunt) means that it’s never “Mission Tearjerker.” George Lazenby does not have the skills or timing of Moore or Connery, but his slightly unsure hand actually works in the movie’s favor at key moments, particularly the final scene.

An exotic, lingering travelogue with the first truly bonkers plot in the series, You Only Live Twice is one of the strangest Bond films. The story is limited to a single locale (no globe-trotting this time), the action scenes are bizarre and almost dreamlike at times, and character development is practically non-existent. In fact, this is the only 007 film where the essential appeal lies almost entirely outside Bond himself, who remains static (unaided by Connery’s indifferent performance). Yet somehow director Lewis Gilbert manages to transcend the film’s flaws with an epic sweep and scope untouched by any Bond film before or since. The shot of Bond escaping from the rooftop thugs is quite simply the finest, most artistic individual moment in any 007 movie. In a film with a stagnant Bond, the scene spotlights the three real heroes of this film: composer John Barry, cinematographer Freddie Young, and director Gilbert, all merging their best sensibilities into one sublime, stunning shot.

Roger Moore’s 007 is one cool customer. When he’s aiming a laser for a last-chance shot at a gas globe that could kill 100 million people, he looks more like a waiter has brought him an unsatisfactory vintage. He shoots a lurking sniper without even bothering to aim. When he’s falling to certain death from a plane, he doesn’t even scream. He pointlessly goes outside on top of the cable car when it is stalled by the baddies, as if to tell the villains that their ruse is so weak that he himself has to make it more dangerous. This nutty, wildly entertaining film starts with Bond plummeting to Earth without a parachute, ends with him blasting into space, and features every conceivable elevation in between. The series was highly formulaic by this point, but all the supporting elements work in this movie’s favor, including John Barry’s elegant score, Michael’s Lonsdale droll villain, and an unusually high complement of witty lines. (“You appear with the tedious inevitability of an unloved season” is one of the funniest jokes in the entire canon.)

As the 007 formula became more and more familiar, the producers tried to bring variety by giving each film a new visual theme. The movies of the Moore era almost all fall flat in this regard, with even the otherwise exemplary Spy Who Loved Me looking like a compilation piece on a visual level.  The exception to this rule is Live And Let Die, an entertaining voodoo/blaxploitation slice of ‘70s fun that offered audiences their first look at Roger Moore’s Bond. Despite the oft-repeated criticism that Moore was “too old” to be a convincing 007, this initial performance brings a youthful vigor and enthusiasm to the role (particularly in comparison to the chunky Connery of Diamonds are Forever).  His unflappable, insouciant manner is a perfect foil for the unpredictable, often spooky voodoo and Cajun visual environments he roams through.  Plus, Moore’s escape from the crocodile island is the best and most flamboyantly Bondian resolution to any of the series’ frequent “snakepit” scenarios.

Pierce Brosnan is the “sensitive man” 007, the first Bond who seems like he could easily be the pitch man in a cologne ad. His Bond is slim, slightly more feminine than his predecessors (pointed out rather gracelessly by a sour grapes George Lazenby), and far more likely to be found on the beach, hair tousled, ready for a conversation about feelings. Coming on the heels of the aloof Timothy Dalton and the freewheeling Moore, this is somewhat jarring, but the transition is welcome and opened the door for Daniel Craig’s fleshed-out Bond. The movie itself is also full of a fresh array of Bond tropes, all with a post-modern bend to reflect the end of the Cold War era. Newfound sensitivity aside, Brosnan carries himself with panache through all the setpieces and one-liners, even contributing a cheer-worthy gesture to the formula when he nonchalantly adjusts his tie while driving a tank.

This is the only James Bond film that does not end with any explosions, a reflection of a more subdued tone following the outlandish space laser adventures of Moonraker. The plot looks back to the decoding machine espionage of From Russia With Love and Dr. No with decidedly mixed results.  The action scenes are occasionally limp and lacking originality, but in the end Roger Moore’s assured performance holds this one together. Just watch the scene where he stands stone cold in the path of a speeding car, waiting till the last moment to get off a perfectly placed shot at the driver. Who else would you want saving the world?

One thought on “James Bond Films”