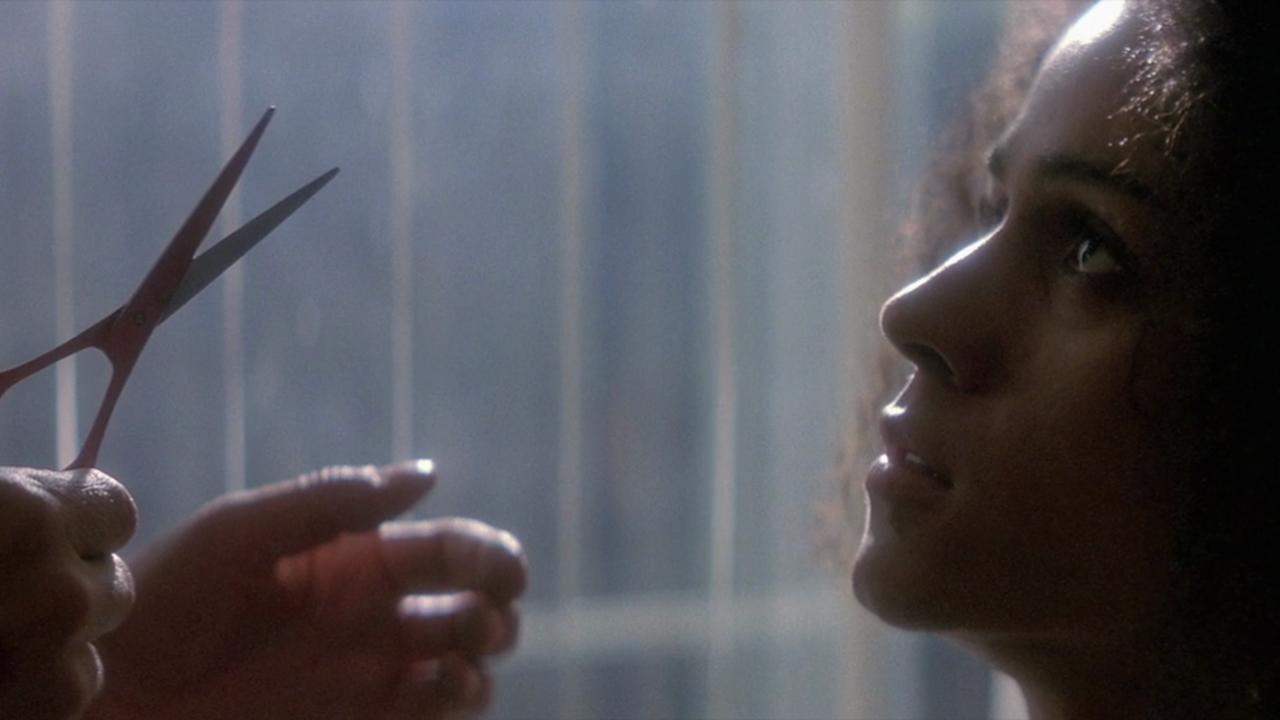 A dying mogul’s mysterious last word – “Rosebud” – prompts a reporter to search through the Great American’s life. He never finds the answer to the riddle but, in the last shot, we do as the same flares up on a child’s sledge, just before the primal scene in which the sledge tossed into a furnace. We saw young Kane play happily with the sledge, just before the primal scene in which he inherits enormous wealth but loses his parents – suggesting he was lamenting his lost childhood. Orson Welles dismissed the gimmick as “dollar-book Freud”, but it remains one of the movies’ great punchlines – and the textbook example of the solution that raises more mysteries.

2. Dil’s Not A Girl The Crying Game

An on-the-run IRA man (Stephen Rea) gets together with Dil (Jaye Davidson), the ‘wife’ of a dead English soldier he helped abduct, falls obsessively in love with her, then discovers when she undresses for sex that she’s a male transvestite. Neil Jordan sets up this Big Reveal with many clues – from the way the squaddie flirts with his captor and claims Miranda Richardson isn’t “his type” – but some audiences twigged by realising Davidson was so close to Cathy Tyson in Mona Lisa that there had to be some reason Jordan didn’t cast the actress again.

3. It’s a plot against the wife! Les Diabliques

This has been done so often since that it no longer seems a twist, but Henri-George’s Clouzot’s film was a stunner in 1956, a suspense-horror picture that turns out to have been a mystery all along. Abused wife Vera Clouzot and battered mistress Simone Signoret conspire to kill sadistic, boarding school headmaster Paul Meurise, the man who mistreats them, but the corpse disappears and pops up again in terrifying moments. It turns out that Signoret and the supposed victim are trying to shock the frail Vera into a heart attack. Whenever a character in a mystery mentions heart condition, you can be sure that an ‘it’s-all-a-plot’ plot is coming.

In the original Jekyll and Hyde novel, the reader didn’t find out until the end that they were the same person; when Psycho came out, audiences didn’t know that Norman Bates was his murderous mother; in David Fincher’s film of Chuck Palahniuk’s book, this old twist was spruced up and made surprising all over. As Brad Pitt taunts Edward Norton for arguing with ‘his imaginary friend’, audiences thought back over the film and realised it made sense after all – the first time you see the picture, Helena Bonham Carter’s character seems a danagerous loon; the second time, it turns out she’s acting entirely sensibly.

5. Raymond’s mother has had him brainwashed! The Manchurian Candidate

The insanities of global power politics are shockingly revealed when we learn that the communist agent who has had Laurence Harvey turned into a zombie assassin is his own far-right mother (Angela Lansbury), who wants to be swept to power in America “with powers that make martial law look like anarchy”. Richard Condon’s original book was inspired by a complaint that red-baiting Senator McCarthy couldn’t have done more harm to the US if he’d been a paid Soviet agent. It’s a great twist because it delivers a surprise villain but also horrific character development, turning a cool spy picture into tragedy.

6. It wasn’t Jimmy Stewart, but John Wayne The Man Who Shot Liberty Valance

John Ford’s mature, sad Western hinges on a gunfight shown twice. At first, it seems earnest young lawyer James Stewart outdraws swaggering baddie Lee Marvin, a heroic act that will launch a political career; then cowboy John Wayne, who loses the girl and the future to the lawbook-toter, reveals that it’s all been a sham – Wayne plugged Liberty from the shadows with a rifle. The real sacrilege is that the plot makes the Duke a bushwhacking backshooter who can only live with himself bu becoming the town drunk. Meanwhile, Stewart lives the high life because “nothing’s too good for the man who shot Liberty Valance”.

Among the many clever quirks of the first Matrix movie was that the big twist came at the end of the first act – as Keanu Reeves wakes up and discovers that slightly off-key world he (and we) assumed to be real is in fact a stimulation of the late 1990s created in the future by evil machines that have enslaved humanity as living batteries. A whole clutch of ‘rubber reality’ movies (eXistenZ, Dark City, The Thirteenth Floor) came out about the same time – so perhaps it was a zeitgeist thing, or signs of a glitch in the matrix.

8. The planet is Earth! Planet of the Apes

An early draft of the apes screenplay was by Rod Serling, master of the Twilight Zone, hence the ending which casts the entire story in a new light – indeed, there’s a Zone episode about astronauts stranded on a desert planet who finally learn they’re in Nevada. The book and the remake have different end twists, but it’s that cool long-shot of Charlton Heston looking up at the shattered Statue of Liberty that delivers the emotional punch. The only way the sequel, Beneath The Planet Of The Apes, could try to stop that end was to blow up the Earth, and that didn’t stop them time-travelling to make more films.

Many sources claim that Leigh dies 20 minutes into psycho, but the shower scene comes halfway through the picture – it’s not just a shock that the name star in the cast – it’s just the shock that the name star in the cast has been killed off, but a betrayal of our emotional investment in Marison and her problems, all rendered irrelevant by murder. It’s an element Alfred Hitchcock added to Robert Hitchcock added to Robert Bloch’s novel, and remains a popular gimmick – a variant comes in Executive Decision (they can’t do that to Seagal!) Less-savvy 1960 audiences weren’t tipped off by the “And Janet Leigh as Marion Crane” end-of-the-cast list billing.

10. Bruce Willis is a ghost! The Sixth Sense

Somehow, this was the twist ending that took audiences by surprise – though anyone who ever watched TV movie in the 1970s found it pretty obvious from the outset. M. Night Shyamalan experimented with a twist in his little-seen Wide Awake, and now seems obliged to deliver them every time – part of the fun is seeing if you can guess where he’s going, and then looking at the film again to spot the clues. Amazingly, the protagonist-is-a-ghost bit was so effective it got used again in The Others (Nicole Kidman is a spook! And so is everyone else!) and surprised people all over again.