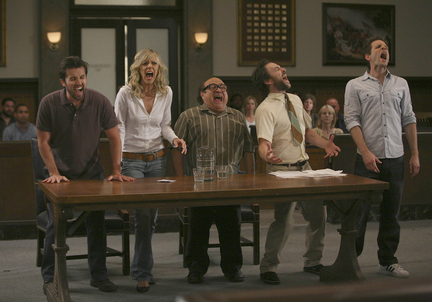 1. Arrested Developement
This was always going to come first on our Netflixs TV Shows list. It’s not only the greatest TV show on Netflixs but it might well be the greatest TV show ever made. It’s a masterpiece in comedy and captures like no other the perfect sense of re-watch-ability, with each repeat viewing offering something you may have missed previously. We often forget how little we laugh at even our favourite comedies. I recently watched my two house mates watch, “The Big Bang Theory”, (they love it, why? I don’t know). A show that in my opinion could only be enjoyed after a major lobotomy. Throughout the whole show neither of them laughed, so why is it a good show? We watch so many comedies that are mindless in an effort to switch off our brains. Arrested Development doesn’t make us mindless, we’re forced to concentrate in a effort to not miss out on a single amazing laugh. That’s a good sign of a comedy, when you need to rewind occasionally to not miss a single joke.

2. It’s Always Sunny In Philadelphia
Okay, it might not be as good as Arrested Developement, but what is? The characters in this show, (namely Charlie) are amazingly well developed. I hate when there is very few differences between two major characters in a TV show. Each character should be completely different and offer a unique point on almost all issues. Think of all of your favourite TV shows, they all have this in common. Anyway, back to It’s Always Sunny In Philadelphia. This show is f&cking hilarious, I laugh so hard at Charlie that I piss myself a little. My favourite episode might be, “Day man, fighter of the night man”. I’m even laughing writing this review… F^ck it, should it be No.1 on our Netflixs TV list? Send me in enough comments and I’ll switch them around.

4. Firefly
This is the most underrated show on our Netflixs TV show list. People who loved Buffy The Vampire Slayer were nerds, let’s face it. However the creator came out with a far better show about cowboys in space and based it around the American civil war. Each story ties into itself nicely, so very little of this, “To be continued” sh^t, which we all hate. If you’ve not seen it, please do as Netflix is one of the only places to watch this show currently and it really is something special. Also after you’ve watched the series, watch Serenity the movie… it’s amaze balls!!

5. Peepshow
The new series is about to start on Channel 4 and hopefully it’ll be as good as the last one. My favourite episode is when Gez kills the dog and they end up eating it on the canal boat. This show is another great example of how British comedies can keep up with American ones.

6. Black Books
It’s nice to have an Irish show, even if it was made in the UK, on our Top 10 Netflix TV shows list. Black Books is so funny, I’m going to have some wine when I finish this post and start watching it again.

7. Louis Theroux’s Weird Weekends
Louis Theroux might not make very informative documentaries and if we were to compare the music industry to the documentary industry, he would be the Britney Spears of it. We all like hits like “Oops I did it again” and the one where she’s a hot air hostess on a plane, but we take nothing from her music. This is sadly true of Louis Theroux. He doesn’t make us think, he does the thinking for us, pushing his own points and opinions across….. but it’s very entertaining and not all TV is about learning, some would say TV is just the opposite. In no TV shows is this more true, than of Louis Theroux’s weird weekends.

8. The Office
We all love the UK Office and it would always beat the US version in a list of the greatest TV shows, however it’s not on Netflixs, so it can’t make my Netflixs TV Shows list sadly. The American one is still extremely entertaining and the first 4 series of The US Office should always be seen by any avid TV Fan. ‘However, be warned now DO NOT WATCH AFTER PAM AND JIM GET TOGETHER!!! I think it is in the last three season and it goes downhill from there. If you keep watching, you become bitter and wonder why you ever watched the TV show in the first place.

9. Tod Margaret
Very much the most forgotten show on our list, as most of you have never heard of it I’m betting. I accidentally came across Tod Margaret on my search for other TV shows Jobe from Arrested Development was in. It’s really easy to watch the show and the neighbour Tod has in the hotel he’s staying in is amazing! I wish her character could appear in more shows I watch.

10. This is England
A really impressive show, that might appear a little slow moving compared to the rest of the shows on out list. If you’re American or a poor man’s American (AKA Canadian), take a look at this show, as it’ll give you an insight into British culture and humour. If you’re German; I feel sorry for you, you boring, boring bastard.

Spaced
An all time pothead favourite than narrowly missed out on being on our list
Brotherhood
Mildly entertaining but never as violent as it should have been. It was almost like they didn’t have the budget to do it.