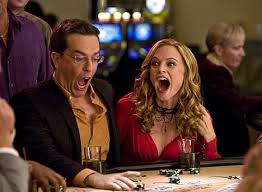 The Casino will always have its place on the silver screen, featuring heavily in the classic Bond films – including the latest Skyfall film – as well as Scorsese’s ‘Casino’, and a host of other films.  Recently though, film has really invigorated interest in Las Vegas’ Casinos due to blockbuster hit, ‘The Hangover’.

The Hangover is mainly shot in Caesar’s Palace – a location for several other films including Rain Man and Ocean’s Eleven.  If asked to name a Casino, Caesar’s Palace would top many lists and this must partly be due to its alliances with the movie industry, seeing countless  games in Hollywood as well as its illustrious past.

The Hangover shows a few different aspects of the modern Casino, particularly the opulent hotels and grand suites that accompany many of them.  The hotel suite in the Hangover is the stage for many of the films comic capers and has invited a lot of interest from viewers wishing to stay in the same room.  The movie emphasises that the ‘Casino holiday’ is about much more than just the gambling aspect; there’s the nightlife, restaurants and entertainment to entice us further.

There’s a great Blackjack stunt in the film where the party is about to be ejected from the table before Heather Graham takes a staged tumble.  Alan, the eccentric brother of the groom, is proficient at counting cards and so he and Phil (Bradley Cooper), attempt to win as much money as possible before getting ejected from the table.  The scene interestingly raises the question of whether card counting is considered legal by the house, or whether it’s just ‘frowned upon’.  This amateurish dilemma makes for some excellent comedy and begs the question of just how easy is it to count cards?

Caesar’s Palace is a name that has slipped into popular consciousness due to its links with the entertainment and film industry, and it shows just how much Casinos have moved on since the early days of saloon bars and small time betting.