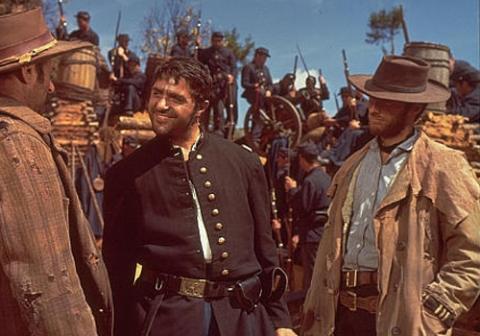 The start of this movie is f&cking class!! Just take a look at the trailer. There’s something immensely cool about this shootouts movie.

The first one is still amazing. I hate the ability of sequels to be able to destroy the original. The third Matrix is as much fun as a burning orphanage.

The Good The Bad and the Ugly, what a movie and what a sound track. This is in my top 10 favourite movies of all time list… which i need to write sometime. The ending in this movie, where ecstasy for gold starts playing as he’s looking for the grave…. AMAZING! Not just the best western but definitely one of thee greatest movies of all time.

Great shootout at the end, it goes on for ages and everyone dies… So I ruined the ending, big deal! What are you going to do about it?

This movie is way too long but the scene outside the bank with the machine guns was worth the wait, in gold!!!!

I know it’s a bit sh%t but that’s why I like it. It doesn’t take itself too seriously and so it shouldn’t. I mean when he reads the Yeats poem, “Tread lightly, as toy tread on my dreams”, I almost got sick in my mouth. Action in the movie is second to none and Bale does a great job at showing no emotions.

I love this movie with all my heart. I’ve seen it like 30 times, cause i love it so much. This make the movie for two reasons; one it a great movie and two because of the shootout in the fortress…. epic!

Slowly this movie is being forgotten about and I don’t like it. It was a lot of fun and had some great shootouts and an epic star battle. If someone loves the TV series FireFly they’re generally nerds who are yet to lose their virginity but I have to admit, I do like the TV series.

9 .Once upon a Time in The West

I love the start of this film. Also, what about that scene in the saloon, watering hole place where the two guys meet. “Can you just play or can you shoot?”

Not as good as the good the bad and the ugly but still extremely good.

More rounds of ammo than an Afghan war lord. This movie is perfect for you and a group of guys to watch. Watch out for the children’s ward scene, at one point he actually has a baby in his hand while he’s firing! A baby! madness!!