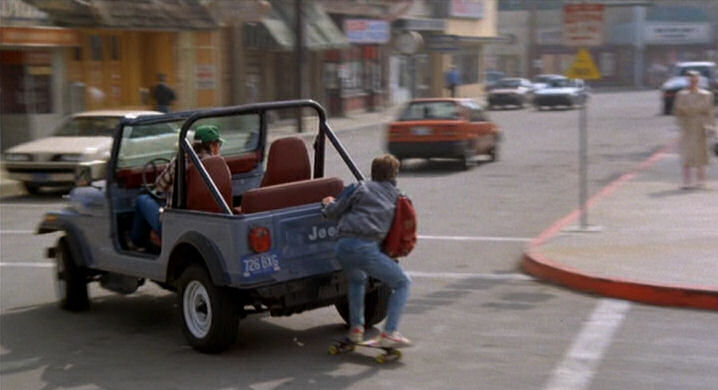 One of my all time favourite films and it should be yours too! It has a rewatchability factor of 10! (Out of 10, 10 being the highest.) If you’ve not seen Jaws then call me and I’ll get you a copy of it somehow.

It is unbelivable how little this film has dated. I love the start of the film…. “shoot her, shoot her!” My friend Journey loves the fact that the T Rex is the good guy in the end, when he saves the day. It’s a cool way to end an epic film.

3. Raiders of The Lost Arc

The greatest action adventure movie, (if you don’t count Jaws as an action adventure movie). The start of this film is amazing and would easily make the top 10 opening scenes of all time… Which gives me an idea, I’ll make that list next. It’ll have Boogie Nights, A Touch of Evil and Indian Jones for starters.

4. Back to The Future

I realise that he didn’t direct Back to the Future but it’s so Spielberg. It’s more Spielbergesque than most of Spielberg’s other films. I love the amount of baits in this movie.

“Save the clock Tower”.

“You’re too much like your old man.No McFly ever amounted to anything in the history of Hill Valley”

“Yeah, well, history is gonna change.” And it does, cause McFly is class!!

5. Close Encounter of The Third Kind
Great movie, maybe a little more tasking than other Spielberg movies but we love it all the same!

6. Poltergeist
Again, not directed by Spielburgh but come on… so f&cking Speilbergesque it’s not even funny. I love the kid sitting in front of the screen, very creepy. I should create a, “Top 10 Movies With Creepy Kids” list, she would make the list for sure. I love the scene when all the chairs are placed on the table and then they’re removed (by the ghost). Simple special effects that don’t age…. ever. Timeless special effects, I should have said!

8. Schindler’s List
This is an example of a movie that isn’t very Speilbergesque. Depressing but a great movie. You kind of feel that Spielberg is a good person for making this movie, even though he’s not done anything, (other than make a small fortune from it.)

9. Indian Jones and the Last Crusade
Way, way, way better than The Temple of Doom. What a sh^t movie that is… but it does have a great opening scene. I hate the kid in that movie, I’d like to punch him in the face, or alternatively give him a humiliating slap across the face.

This movie is also feature on my Top 10 movies to watch with your girlfriend list, (a very good list, if i do say so myself). I really enjoyed this in the cinema, very entertaining and it has a cool alien and a great back story to it. Charlotte my friend pointed out that it’s basically the action version of E.T but I think that’s why I like it so much!