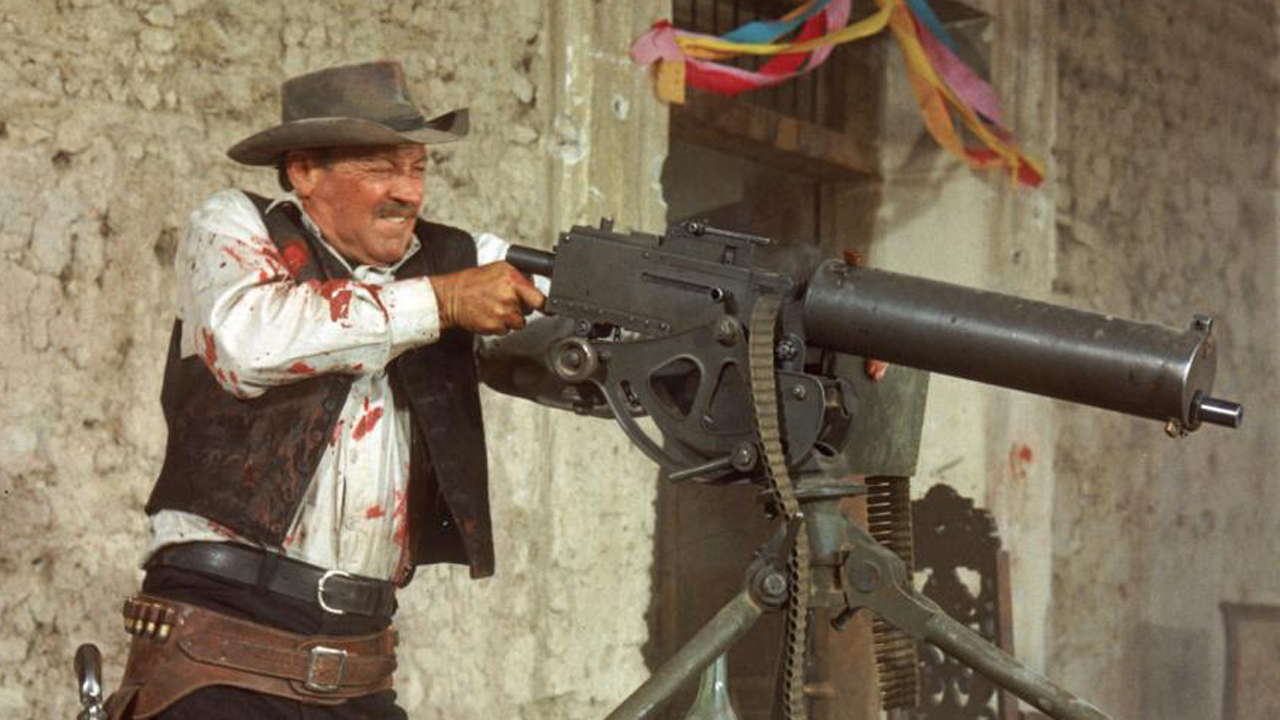 It remains unchallenged, and perhaps unsurpassable, as the greatest shout-out ever mentioned, choreographed and edited on celluoid. Upon this closing battle, as the ageing remnants of the Bunch head out to certain death against a small army of Mexican soldiers, hangs out not only the film’s but Sam Peckinpah’s formidable reputation. You can see why. Shot over 12 days, using 10,000 squibs of blood, this seminal slice of bloody carnage divined a miraculous form of editing (rapid cuts between slow-mo scenes, zooms and violent pans and tilts) that has fed every action movie.

Trust Michael Mann to have the gall and talent to transform a straightforward getaway into a mesmeric crossfire assembled, over three weeks of intensive filming, with an emphasis o absolute realism, and transforming downtown LA into beirut-style war zone. Ex-SAS guru Andy McNab trained the actors – indeed, Val Kilmer’s lock and load on the run is deemed flawless. Mann’s crisp editing brilliantly keeps track of all the players amid the chaos, jigging and blurring with the hand-held camerawork. And more importantly, Robert De Niro keeps his shades on throughout. Genius.

The opening salvo of Sergio Leone’s masterpiece is all about anticipation, as the duster-clad Woody Strode, Jack Elam and Al Mulock await a train and a killing. As a director he was always more concerned with the moody swell toward action rather than its violent pay-off. God, or maybe it’s the devil, resides in the details: the dripping of water into Strode’s hat, the buzzing of a fly around Elam’s chin. When the train departs, Charles Bronson, their lonely quarry, is revealed. Then, “Bam! Bam! Bam! Bam!” – three dead gunfighters and a wounded antihero. Over and out.

5. The Odessa Steps Revisited (The Untouchables, 1987)

A nod to Battleship Potemkin’s Odessa Steps, De Palma concocted the daftly magnificent sequence on the hoof when Paramount denied him the money for the train-bound gunfight. But who cares? This works a dream as Kevin Costner and fellow G-man Andy Garcia prise Capone’s accountant from the grasp of his heavies, De Palma cutting back and forth from the free-falling pram, the screaming mother, the beatific baby and the mess of gunfire with nonchalant grace. When Garcia’s sharpshooter, in a single move, tosses a spare gun to his cohort, skids beneath the pram to save his child and fixes the last bad-hat in his sights, you just want to cheer.

They’ve got guns, lots of guns, flamboyant, comic book cheek, the Wachowskis push their leather-clad hero and heroine to the extremes of the appropriately dubbed ‘Bullet Time’. Easily the most memorable dose of action in the entire trilogy, the idea was to take the basic shoot-out and refit it to the whirl gigging possibilities of their new technology. It’s gunfight as absurdist dream, with Keanu Reeves and Carrie-Ann Moss spinning cartwheels, bouncing up walls and reducing marble-chip office entrance hall to pie-crust.

“Benny, bring me everyone,” snarls snivelling weasel Gary Oldman as he attempts to root out the film’s quasi-Lolita coupling, hit man Jean Reno and protege Natalie Portman, from their scuzzy New York hotel. He’s going to need everyone. While the extraordinary gunfight twists and recoils into ever more exotic shapes, crafted by the ingenuity of both acrobatic killer Reno and his Gallic director Luc Besson’s athletic camera (extra marks for POV death scenes), the sequence also proves to be the movie’s emotional falcrum. Only in this deliciously inverted love story could such a touching goodbye be conjured amid a storm of bullets and crumbling masonry.

As with many other entries in the list, this marks the culmination of the story – all the mood stretches of secrecy, angst and barely-contained violence that have been something inside Phil Joanou’s underrated gangster thriller. New York’s Hell’s Kitchen is the setting (read: one-horse town), Sean Penn the former local turner undercover cop (read: sheriff) confronting Ed Harris’ Irish mobster and his gang (read: band of outlaws) in a beautifully shot barroom gunfight (read: saloon). It’s all executed with a gilded, Peckinpah-reverential style: slow-motion agony, liquid bursts of blood and pure rage.

While the entire Western genre is proudly built upon the notion of shoot-outs, it has taken the revisionism of modern times to unveil the candid truth of men shooting at one another. When Costner set about mounting his inevitable climactic showdown between the free rangers and the evil rangers, he sought the genuine physics behind gun-fighting. Here when a man is shot he doesn’t stagger about like a drunkard – he hits the ground by sheer momentum; when a shotgun blasts it takes out half a wall, carrying its victim five feet through the air.

A flawed film, but with one truly original and fitting take on the shoot-out. The contemporary set-up once again carries the scent of a Western, where the semi-deaf, small-town sheriff (Sylvester Stallone), taunted for “not being a real cop”, takes on the corrupt police who make their home on his turf. When the inevitable shooting begins, a stray shot knocks him into almost total deafness and we are sucked in with him, leaving the watcher as woozy, disorientated and shocked as the hero. In comparison to the by-rote action shuffled through the cop genre so regularly, here was something staggeringly inventive.