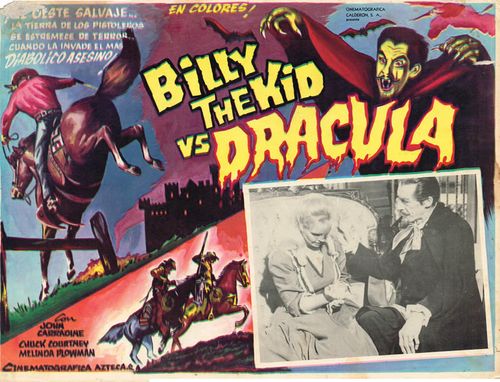 There’s Been A Certain

escalation in the field of direct-to-DVD/cable-telly critter vs. critter pictures, from the comparatively modest days of Boa Vs. Python and Komodo Vs. Cobra – and this tale of two recently thawed-out giant masters setting into a major tussle is perhaps the acme of the subgenre. Clearly the money wasted on Michael Bay’s toy commercials should have spent where it counts – on providing a proper mega shark and giant octopus combo rather than the el cheapo CG specimens here. Boa Vs. Python and Komodo Vs. Cobra were at least notionally sequels to four separate films establishing their contestants as menaces in their own right (there’s even a Python 21. But this takes a short cut and new-mints its monsters since the film’s not connected with earlier mega shark or giant octopus movies.

Luchadores Contra La Momica) is officially a sequel to Donor of Doom (aka Las Luchadores Contra El Medico Asesino or Rock N’ Roll Wrestling Won >.11 Vs The Aztec Ape), in which Latino lady wrestlers Gloria Venus (Lorena Velasquez) and Golden Rubi (Elizabeth Campbell) mixed it with a mad scientist and his evil gorilla. The Aztec Mummy had his own series on the go – and had a warm-up bout in. Robot Vs The Aztec Mummy, but nothing could have prepared the bandaged bastard for the can of ass whup unleashed on his rubbery head by the ladies in leotards who lag-teamed him to oblivion with then body-slams and pin-down holds. Las Luchadores: returned after this victory for bouts with the She-Wolves Of The Ring and the Panther Women, and retired undefeated though Doctor Of Doom was later remade in 1969 as Night Of The Bloody Apes.

takes characters well-established in separate series of films, the Frankenstein Monster (here Bela Lugosa) and the Wolf Man (as ever Lon Chancy Jr.) and spends an hour or so on a plot which serves just as an excuse to get the two iconic monsters the same collapsing castle at the climax, so they can angrily tear the hell out of each other. This was cinemas first great monster team-up a precedent for AVP Freddy Vs, Jason. Puppet Master Vs Demonic Toys and (Ulp!) Van Helsing. Constricted as a Wolf Man sequel, it’s pretty good — as a Frankenstein flick, not so much. But at least it delivers on the hokey spectacle that its title promises.

THE MOST NOTORIOUSLY LADY

Libertines in fiction have tangled a few times in skin flicks, regardless that they lived in different centuries – this 1970 British quickie, not released until 1974, at least stretches to iconic casting Penny Brahms (the upside-down stewardess from 2001) and Saint Joanna Lumley (yes, Joanna Lumley!) play Constance Chatterley and Fanny Hill, who are rival brothel keepers in the 1920s. Also, starring comedy Stalwarts Jeremy Lloyd (who Lumely married) and Richard Wattis. Why isn’t this on DVD?

THE IS STILL IN PRODUCTION, SO WE’RE IN THE CANT-WAIT-

To-see-if-it-delivers phase of anticipation. It stars Ford Austin, who also directs, as Jeffrey Dahmer, and Randal Malone as John Wayne Gacy, and we have no idea how the plot is going to pray off on the title.

Goes west, and tussles with chick courtesy’s gunslinger in a horror western that hit screens in a double bill with Jesse James Meets Frankenstein’s Daughter. Dracula has starred in more Vs. films than any other famous character – perhaps because he’s safely out of copyright. See also: the Batman Vs. Dracula, Bonnie and Clyde Vs. Dracula, killer Barbys Vs. Dracula, and Emmanuelle Vs. Dracula (easily among the most disappointing Vs. Flims ever).

Abstract notion on the list, since it pits categories against each other rather than characters. Science-fiction films have always made a distinction between monsters (often transformed humans spawned on Earth) and aliens (inimical bastards with big exposed brains from outer space). Of course, if aliens did invade we’d all pull together to light back – and that would include earth’s previously despised monsters. Yay.

In 1933, reigned for two decades as Hollywood’s biggest, hardest iconic creature – but in 1954, the Japanese threw down the gaunt let with Gojira (or Godzilla) – King Of the Monsters. King’s FX man, Willis H. O’Brien, originally pitched King Kong Vs. Frankenstein to Tobo Studios, who split up the stars, threw in Frankenstein against a giant octopus and put Kong in the ring with their radioactive dinosaur. Kong eventually won the epic bout.

THE JAPANESE EQUIVALENT OF EASTWOOD VS, WAYNE

The 20th film in a long running series for Shintaro Katsu Ichi, a blind masseur is words man with Dare devil – like super – senses, it also found Tashiro Mifune rethrning to the wandering samurai be played in the Akira Kurosawa classic, Yojimho and Sanjuro.

WHOEVER WINS, WE LOST……. TWO

20th Century Fox franchises about scary aliens beings. Linked by a subliminal bit in Predator 2 (Alien skull in the trophy room) and sharing a history of battles in comics and video-games. A big screen clash was inevitable, and there’s even been a sequel. Weirdly, they can’t quite get their titles straight, offering AVP: Alien Vs. Predator and AVPR: Aliens Vs. Predator. It’s also a bit of a problem for the team-ups that, strictly speaking, the Alien aliens are predators while the Predator aliens are just sport-hunters.

It’s probably the most primal, most visceral come-on a film can offer, sometimes extending beyond the title to the actor’s billing, as in ‘Bruce Campbell Vs. Army of Darkness’ or the unforgettable ‘Terry-Thomas Vs. Leslie Phillips in Spanish Fly!’ Vs. – or Versus, or V. – titles don’t even promise a story, just a punch up. In the annals of sport, you get Ali Vs. Frazier and Rangers Vs. Cellic, while history offers us Christians Vs. Lions or Allies Vs. Axis. The implicit promise is, of course, there will be blood.

It’s a favourite pub game that can easily be extended to a movie pitch meeting – you know you’d queue up for superman Vs. Spider Man, Daleks Vs. Vulcans, SAS Vs. Green Berets, Michael Clayton Vs. Erin Brockowich or Wall – Evs. Terminator. The quality of the film is almost beside the point, since this list is all about the anticipation raised by the title and the poster.

Seriously, how excited could you get? Whiny husband vs. boring wife…. In a courtroom! Now, Kramer Vs. Wolverine – That might be worth watching. Especially if it was the Meryl Streep Kramer. Or the one-off Seinfeld. Snikl!