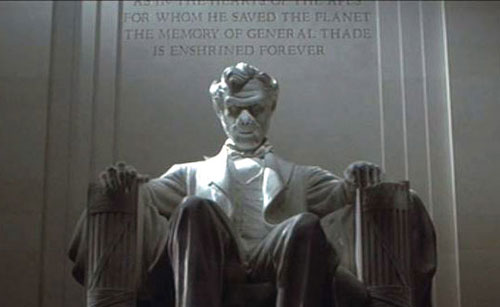 It was a great deal to expect

that Tim Burton’s film (the first to use the term re-imagining’, by the way) could conjure a twist ending as flooring as that of the 1968 version – which is why of course might beg the question, why bother? But bother they did, and we were promised that they’d come up with something that would blow audiences minds. That’s semi-true. After Leo (Mark Wahlberg) departs the ape planet, having let the bad chimp Thade (Tim Roth) trapped in a broken ship, he returns to Earth to find a statue of Thade where President Lincoln should be and a lot of monkey cops. Where the original uses genius simplicity, this requires several flipcharts, inumberable hours and a dodgy grasp of quantum physics to explain.

The french original boats one of the best twist endings in cinema, with a presumed-dead husband revealing himself to be comfortably in the world of the living, giving his frail wife a heart attack and settling free (he thinks) to live in conspiratorial fancy-woman. That wasn’t enough for the Jeremiah Chechik version. Here the mistress had a change of heart, the frail wife lived and the husband wound up drowned in a pool. A pudding that was truly over-oeufed.

a woman trying to stop a mysterious killer who has butchered her friend’s family is gory, scary, and yes, very tense. Which makes it such a shame when the twist reveals that the woman herself is the killer and the rest is imagined, but doesn’t go to any great lengths to explain how that’s actually actually plausible.

who believes businessman Harrison Hill (Bruce Willis) may have murdered a young woman. Or is the killer Hill’s wife? Or Price’s creepy research partner (Giovanni Ribisi)? Or Price herself? Turns out it was Price, explained in a hurried piece of exposition that doesn’t so much turn the story on its head as tell a completely new one and staple it over the existing one with all the care of a drunk, one-armed nursery school pupil in craft hour.

Remember when you used

to write stories at school and could never quite think how to end them, so you’d put “It was all a dream” and go out and play? Apparently you can get paid vast fortunes in Hollywood to do just that, as Jennifer Lynch did with this weirdo story of a man who de-limbs women he’s obsessed with so she can never leave him. Except he doesn’t, because like that entire series of Dallas without Bobby Ewing, it was all a dream. Phew.

You’ve set up a juicy

plot in which a woman (Julianne Moore) is convinced her child has been taken from her, but the rest of the world thinks she’s imagined it. Now, how do you find an ending smart enough to make sense of all that? Blame it on aliens and blow up half the building? Sure, okay, that’ll do.

It’s nothing personal but you just keep turning up in films with terrible rug-pull endings. Perfect Stranger was really bad, but you were really just a shideshow in that one. Here, however, you played a psychiatrist who believes one of his patients might be a killer. Hmmm, could it be the gender-confused kid who looks EXACTLY LIKE THE MYSTERIOUS WOMAN YOU’RE SLEEPING WITH?

is usually the greatest twist, but a convoluted reveal can work just as well if skilfully laid out. Ten Little soldiers, the Agatha Christie book on films claims to be based, boasts a complicated solution to the mystery of who killed ten strangers brought together, which nevertheless makes sense. This ‘version’ puts the ten strangers in a creepy motel, bumps them off and then reveals them all to be a different personalities in a murderer’s fractured mind. Silly.

To a certain extent this was simply

Shyamalan playing with the deceitful ways expected of him. First he set up a possible twist involving monsters in the woods, eagerly unmasking it at the start of the second act. But audience conditioning meant there was expectation of a second twist, which turned out to be the screamingly obvious, “They’re living in the modern times!” If you’re expecting a twist, all the tension is undone. The director abandoned the final-act switcheroo after this.

Brett ratner could not claim great

many brave movies in his continuation of Bryan Singer’s mutant series. Killing off the Professor X (Patrick Stewart) was a bold decision that suggested absolutely nobody was safe from having the credits rolled. Which made it significant cop-out when a final scene revealed ol’ Chrome Dome had been telepathically transported to another body.