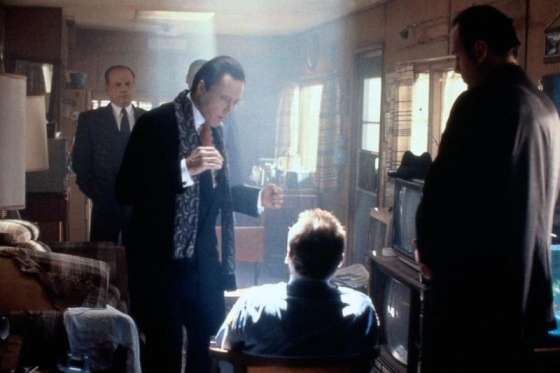 I love this movie! It’s perfect, I literally wouldn’t change anything about it. It’s perfect for what it is…. an action masterpiece. It get’s number 1 on my “movies to watch hung over” list and it gets number one here. Overall, Tony Scott arguably might not have created the same calibre of movies as his brother, but he did make Top Gun. This alone is enough to ensure his directing immortality. In its section (action movies), it compares to or beats American Gangster, Alien, The Gladiator and Blade Runner (Blade Runner & Alien run it close). He was a great director and while he might not have made the same iconic movies, as say Hitchcock or Kubrick, he probably entertained as many, if not more people. As much as we hate to sometimes admit it, there is a place for easy watching films and Tony Scott was second to none at making them.  He was a great director and I know he’ll be remember for entertaining the s$it out of millions.

Firstly, f&ck you Quentin Tarantino! You couldn’t have made this movie better if you directed it. You would’ve played Christian Slatter’s character and f*cked the whole movie up. Now that that’s out there… What a great movie and an amazing soundtrack. You get that feel that Tony Scott directed it, mainly out the f*cking class action sequences and it being so bloody re-watchable.

I love this movie so much. I’ve seen it so many times and it just gets more and more nostalgic the more I watch it. I love the scene where they race to their dinner appointment in the rental cars… Or the scene where he goes back out onto the track during that d*ckhead’s victory lap… Or the hot police woman, who ends up being a stripper/escort… Or the scene… you get the point…

Okay, not as good at the first one but which sequels are? Despite that, it is massively entertaining, completely re-watchable and it’s pretty funny.

Before Taken, we didn’t have that many great revenge movies to watch. To be honest, even with Taken, we still don’t. Death Wish, Mad Max etc. are all older, there are no really recent revenge movies. Man on Fire was modern, full of vengeance and entertained the be-Jesus out of us.

It’s not going to be discussed in the next decade, let’s be honest, but every now and then I hear someone saying how they love this movie. I’m not the biggest fan but I like it!.

It’s no Das Boot but if Das Boot had never been made I bet I’d love this movie! Instead I just like it. The only issue is that there is no real action in the movie. It’s like Tony Scott is dying to get an action scene in but the script just won’t allow him.

Watch this! If it wasn’t 9 minutes long, I’d have it higher up the top 10. Take it for what it is, a glorified advert!

9. Enemy of the State

Overrated when it came out? Not heard the movie mentioned in the last five years? Maybe… However, some would say that the devices in it were ahead of their time …. awww f&ck that, it was pretty average!

Who remembers this? No one and probably cause it was pretty shit. However, it’s hard to create a list of 10 great movies, regardless of the director ….. Okay maybe excepting Spielberg, Kubrick and Hitchcock… Maybe even Tony Scott ‘s brother (see what I did there?) and that’s about it.