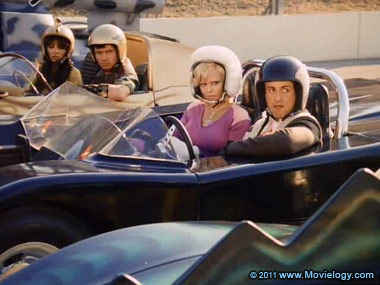 1. Deathrace 2000
Euthanasia day at the hospital, Machine Gun Joe Viterbo and a dytopic storyline. Anyone who’s seen it knows why it comes in first; anyone who hasn’t, get bent!

2. The Warriors
What a great movie, no self-reflective bullshit about it, people die, we move on, as is life! It was a close call between this and “Death Race 2000” on our top 10 B-Movies of all time. If you’re looking for a B movie to watch, this is what you should pick.

4. Bad Taste
Peter Jackson should never have made “Lord of the Rings”. Instead, he should have continued to make B-Movies like this and “Brain Dead”.

5. Heathers
Love when the cops find the mineral water and instantly think the two footballers were gay and committed suicide, brilliant! Christian Slater owned that decade for coming–of-agemovies, like this and “Pump up the Volume”.

6. Assault on Precinct 13
The besiegers are more like zombies with guns than humans, which is class! I should have put “Dark Star” on this list as well but I think I’ll make a John Carpenter top 10, he deserves it!

7. Earth versus the Flying Saucers
Excellent Sci-Fi that is so underrated it’s hard to find someone who’s reviewed it!

8. Brain Dead
By far the funniest zombie movie …[email protected] Shawn of the Dead! When he uses the lawnmower to cut down the walking dead… brilliant!

9. Flash Gordon
Colourful as you like, this movie kicks ass almost as much as its soundtrack.

10. Faster, Pussycat! Kill! Kill! Faster, Pussycat! Kill! Kill!
Quentin Tarantino stole a lot from this… clearly seen in “Death Race”. If we’re going to discuss what Tarantino stole from other movies, we’d be here running through not only the overall plot of each of his films but nearly every scene he’s ever created. So let’s not do that, and instead, marvel at this great fun movie that oozes sex appeal.

One thought on “B-Movies”