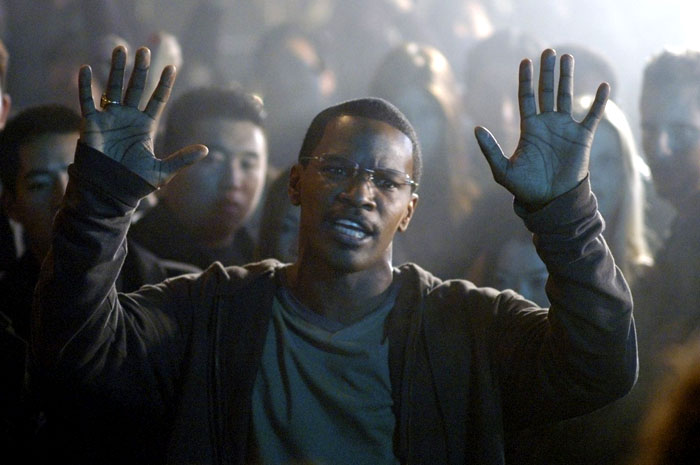 With “The Amazing Spider-Man 2” set to come out next May, we’re starting to see a lot of photos of Jamie Foxx-turned-icy blue. This is because Marvel has elected to bring villain Electro into the saga, and though Electro has nothing to do with ice, he’s been transformed by a lightning strike, gaining the power to control electricity and turning him into an oddly lit-up, blue character. It’s an interesting turn for Foxx, who’s been on something of a roll lately, and it got us thinking about his best films to date. So without further ado, here are our picks for Jamie Foxx’s top 10 films.

This outrageous comedy about 3 burned out men who plot to kill their bosses features Jamie Foxx as “Motherfucker Jones.” Jones is a shady man the main characters find in a bar, and blindly assume can help them plot murders. It’s a minor role, but a hilarious one.

This is another comedy in which Foxx plays a minor role, but his short time on screen is some of the best in the film.

The iconic Miami cop drama re-make featured Colin Farrell and Jamie Foxx in the two leading roles. Foxx was at his best – cool, collected and tough – in a film that probably didn’t get enough attention.

This is one of those almost-great films that too few people saw. Foxx plays Nathaniel Ayers, a supremely talented but homeless musician discovered by a journalist (Robert Downey, Jr.). If you missed this excellent drama, it’s available on Picturebox Films, a streaming service that updates its collection monthly.

Based on NFL action and drama, this famous American football film is one of the best sports films ever made, and features Jamie Foxx as Willie Beamen as a 3rd string quarterback forced to step up and lead his team.

Though Will Smith steals the show, Foxx was memorable as cornerman and training assistant Drew Bundini Brown in this outstanding film about boxing legend Muhammad Ali.

This action-packed film is about a man named Clyde Shelton (Gerard Butler) seeking vengeance for the death of his family, and the prosecutor (Jamie Foxx) who must contain his killing spree despite his own danger and sympathetic feelings toward Shelton.

This outstanding biopic may be the performance of Foxx’s career, as the actor masterfully captured blind musical icon Ray Charles.

This recent Quentin Tarantino masterpiece features Foxx as Django, a freed slave out to free his wife from the tyrannical ownership of Calvin Candie (Leonardo DiCaprio). It was undoubtedly one of the best films of 2012.

Finally, there’s the oft-overlooked “Collateral,” a brilliant film starring Tom Cruise and Jamie Foxx. Cruise plays a contract killer who enters Foxx’s cab and proceeds to force him to play chauffeur to a paid-for night of killing. Foxx is absolutely brilliant.