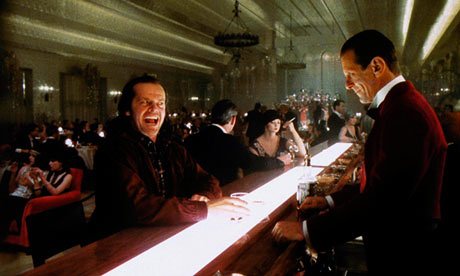 IMMACULATELY ATTIRED IN THE CLASSIC LIVERY OF A GRAND

Hotel flunky, hair slicked to perfection, buttons gleaming, his smile ingratiating but never smarmy, his manner solicitous but never obsequious, the overlook hotel’s Lloyd is, before he even utters the magical phrase, “Your credit’s always good here, Mr. Torrance,” the bartender that dreams are made of. Not surprising, since that he is essentially a figment of a deranged imagination, as much of a ghost as the putrefying old woman in the bathtub upstairs. Even if he does mix a better gin fizz.

Epitomizes the white-aproned, glass-polishing, seen-it-all, sourpuss barkeep of legend. “One’s too many an a hundred’s not enough,” he growls in response to Ray Milland’s poetic “soaring ballon/barge of Cleopatra” discourse on the mid-expanding benefits of booze. But, crucially, he still keeps serving the loquacious old soak. Incidentally, the interior of Manhanttan’s P.J Clarke’s where much of the elbow-bending action ensues, was recreated on a Paramount sound stage. Every evening at 5pm, writer Robert Benchley would wander in, belly up to the bar and Da Silva would pour him a bourbon. He was homesick for New York.

Faced character actor par excellence, Taylor Vince was born to play gruff but kindly barkeep Stanley “Stinky” Womack in Ted Demme’s bittersweet tale of friends reunited. “Do you see her face?” he barks at his clientele (Timothy Hutton, Matt Dillon et al), snapping them out of their no-beer-goggles-required reverie over Uma Thurman.

“Girls like that are born with a boyfriend.” With the possible exception of “Leave it Barry, he’s not worth it” this is the most opalescent pearl of wisdom ever proffered in a drinking establishment.

THE CRUISER HAY BE THE

nominal star of this oh-so-’80s ode to imbibing, but Brown steals his thunder at every turn. As Doug Coughlin, Cruise’s aged-to-perfection mentor Brown twirls his shaker and shakes his moneymaker with a wry twinkle in his eye, dispensing rules-for- living aphorisms as he goes (“When you see the colour of their panties, you know you’ve got talent”). He’s a three-olive, desert-dry Dirty Martini to Cruise’s plastic-monkey- and-a paper-parasol Sex On The Beach.

FINDING THEMSELVES PURSUED BY

marauding zombies. Americans seek refuge at the mall. The English, naturally, head for the pub. And The Winchesters John and Bernie (modelled on the proprietors of Simon Pegg’s real-life local. The Shepherds, in Highgate) would seem to be the archetypal genial hosts to whom any right-thinking Brit would turn when a spot of sanctuary, a few pints and a cheese-and-ham toasties are of the essence. That is, of course, until they turn into flesh-hungry monsters and have to be cudgelled to death with the fat end of a pool cue.

a character based loosely on notorious Boston mobster Whitey Bulger, the late, lamented Peter Boyle turns in a characteristically salt) performance as a special friend of fading gun-runner Eddie Coyle (Robert Mitchum). Dillon doesn’t just keep the liquor flowing and shoot the shit across the planks: he’s a stand-up guy who treats his old buddy to a swell night on the town before blowing his brain out for turning snitch.

handed in a bit of note-switching skulduggery, Noonan does not as might be expected, advise him to bugger off and try it somewhere else. Instead, with stony efficiency, he spears him full-force in the guts with a baseball bat. Remember that next time you congratulate yourself for proffering a fiver and pocketing change for a tenner.

may be. But there’s no denying this inspirational chick Hick its appeal. Who among us has not feasted our eyes on Perabo along with pals Budget Moynahan and Maria Bello, strutting her stuff atop the titular establishment’s counter. Pouring the sauce down the necks of eager punters, heads thrown back, mouths agape like hungry cuckoos, and not wished things were a little more like that down The Fox & Ferret.

THERE IS NO BETTER

portrait than this of the gin-soaked, geriatric ex-military-man-turned- publican, quietly embalming himself within the nicotine-stained mausoleum of a decrepit boozer, living on past (often imagined) glories and generally being a pissed-up old fool. It’s a character as intrinsically stitched into the fabric of British drinking culture as the ageing, amorous barfly and the bosomy barmaid, and a wonderful turn from Johnson.

Motta is on screen for fewer than 15 seconds in this seamy pool-hall meditation on the nature of winners and losers, and utters just one word: “Check.” However, what makes his cameo so mesmerising, brief though it is, is the opportunity it affords to compare the shambling wreck on display here to both the steel-wire destroyer of men portrayed

Brian Flanagan, Tom Cruise’s character in this uber-’80s offering, puts the cock in cocksure. Set off by Cruise’s mile-wide grin, Flanagan is a poser who redefines self-satisfied as he flings glass ——– learns from Bryan Brown and ————– Elisabeth Shue. Insufferable—————