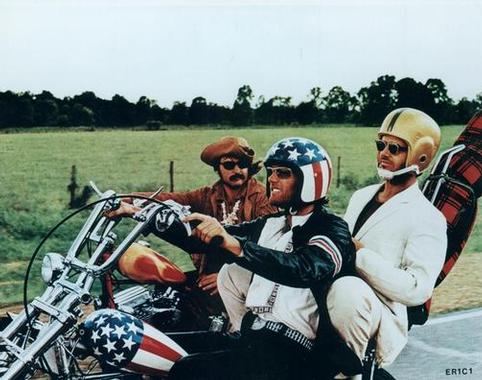 This is the ultimate road trip movie. If you haven’t seen Easy Rider, go watch it right now! Basically the story is about two guys who bike across the country, smoking weed, chasing women and taking acid…. what a trip! (see what i did there?) I like the fat that they kind of know at the start that they will never return and there is a feeling like they are like two dogs, going to the woods to die alone. Dennis Hopper and Jack Nicholson steal the show. Jack Nicholson is hilarious, riding around in an american football helmet. Take a look, it’s an amazing road trip movie/ movie in general.

What Home Alone is for Christmas movies, Planes, Trains and Automobiles is for Thanks Giving. I’ve never been in the US during Thanks Giving but movies like Planes, Trains, and Automobiles capture it pretty good… I think anyway. I love the scene where they drive the wrong way down the motorway, “YOU’RE GOING THE WRONG WAY!!!!!!” Just brilliant. It was always a shame that Steve Martin and John Candy didn’t make more movies together. They really made a great team. As much as I love Steve Martin, John Candy steals the show. Even when he only appears in Home Alone for 5 minutes he’s amazing.

They seem like they should kiss at some point in this movie. I’d say if they survived, (obviously extremely unlikely), they would have got in on at least once. Good ending, if not a little sad.

This movie is so 80’s and Tom Cruise plays his usual cocky 80’s character that defined his career during this decade. Let’s be honest, you could take the character from Risky Business and swap him with Rain Man’s brother and we would not notice. Or alternative, swap him with his character in Cocktail, or Days of Thunder, or The Colour of Money. Besides all that, this is still a great movie. Dustin Hoffman won an Oscar for his role in Rain Man, stealing the award off Gene Hackman for his role in Mississippi Burning, a movie that also deserved an Oscar.  Hoffman deserved it, partly due to the fact that Gene Hackman was playing a very similar character to the one he plays in The French Connection, (for which he got an oscar in in 1971).

National Lampoon’s movie are on average terrible. When I see that a movie has National Lampoon’s in the title I instantly don’t want to watch it. Een though I love Christmas Vacation, Vacation and European Vacation. Get your act together and go back to making great movies.

Should this be higher on our list? Probably. I think the reason i put it lower down is not because it’s not better than some of the movie on here that get a higher rank but because it’s less road trip orientated. They spend too long in the same place. Dumb and Dumber would arguably make the top 10 greatest comedies of all time…. what a f*cking funny movie.

The story of a dysfunctional family who embark on an epic journey to get their youngest member to a beauty pageant. The movie reminds us that there are no perfect families and that the imperfections are what we love about our families… blaa, blaaa, blaa, you get the idea.

I love the grandfather who does heroin and buys dirty magazines. Little Miss Sunshine is great to watch with your own family.

9. Fear and Loathing in Las Vegas

This is a really underrated movie. I mean Nicholas Cage got an Oscar for it…. Yes Nicholas Cage has an Oscar, I know! I was sure he’s get on for Drive Angry, Snake Eyes, Ghost Rider or The Sorcerer’s Apprentice. Naming the last few films has given me the idea of doing a Top 10 Bad Nicholas Cage Movies. He has done some sh^t movies. Fear and Loathing in Las Vagas is a good movie and he actually plays the part very well of being an alcoholic, (method acting, I guess)

Not really a road trip movie but it’s amazing, so it’s on the road trip list. Please watch this movie if you haven’t seen it yet. It’s pretty short and the storyline is great. Basically, a guy is coming home for the weekend from work and he pisses off a truck driver who turns out to be psychotic and follows him, attempting to run him off the road at every opportunity.