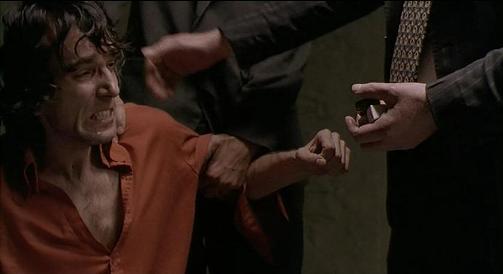 The Field is the best Irish Movie of all time! Show me someone who disagrees and I’ll show you a liar!  The dialogue is f-ing amazing, the acting out of this world and without sounding like a movie nerd, the cinematography is superb.

Neil Jordons best movie… fact! Not my favourite director but this movie couldn’t have been made better by any other director on this earth.

3. The Wind that Shakes the Barley

As historical movies go, this is a great one. Comparing “The Wind that Shakes the Barley” to “Michael Collins”, would be like comparing a bottle of  Dom Perignon, to a bottle of Lambrini. You just don’t do it.

4. In The Name of The Father

What a movie, arguably it should be second on our list. Despite its dark subject matter, you can watch this movie several times and it never gets boring. The roller coaster of emotions we feel is spectacular, from the fun hippy lifestyle Gerry has at the beginning, to the harsh prison time that brings him closer to his father. The ending is unforgettable, when he utters the immortal Irish cinematic quote , “I’m a free man, and I’m going out the front door.”

Hunger actually makes you feel hungry watching it. After watching this movie, I almost bought a t-shirt with a picture of Maggie Thatcher on it, saying “Wanted for Murder”. Now that I’m living in the UK and the Tories are in power… not sure if it would’ve been a good purchase.

Not only is this the best Irish short movie probably ever made, it could be one of the best short movie Oscar winners of all time. If you think the Cohen Brothers did dark comedy, check this out!

Either the Slapper or The Commitments was going to make it to this spot. It was a tough choice but I think The Commitments wins, purely due of the fact that it gives us a look into what growing up in Ireland was like during the late 80’s.

Another Northern Irish themed film you say? Well what do you expect from a country that hasn’t been involved in a war in close to a century. Good movie but fails on re-watchability.

9. War of the Buttons

No one has seen this movie besides Irish people but we all have a special place in our heart for it. We all remember going to the cinema to watch it as kids. We don’t have many Irish children’s movies and this one’s special. The Book of Kells is an obvious exception but that was kind of boring… lets face it.

Was always going to make the Top 10. My father, a proud Limerick man, once told me that Limerick was really kind of like that when he was younger but, as he put it; “We all didn’t have alcoholic, abusive fathers”. Neither did we Dad!