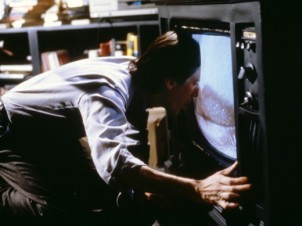 1. Videodrome
WOW, what a movie! Some movies have an ability to follow us around, no matter how much we want them to leave us alone. Audition, Jaws, The Wicker Man or even more recently, Killer Joe; these all all good examples of this. Videodrome is very much in this category. In fact every Cronenberg movie, (that creepy f&ck has ever made) sticks with us. By far James Woods best movie, (yes even better than Any Given Sunday! [Sarcasm]) .

If you watch only one movie on this list or one movie on your Netflix account, please let it be Videodrome. It’s by far the best movie on Netflix at the moment, that you wouldn’t have seen before.

2. Fast Times at Ridgemont High
Get some friends around, if you have any and watch this movie together.  Just watch the first minute of it and I swear to whatever f*cking God you believe in, that you will wonder, “Why the f*ck have I not heard of this movie before? I wish I knew the creator of “What Movie Should I Watch”, So I could him or%l sex!”

3. Death Race 2000
I can’t believe that Netflix has this movie…. it’s really amazing. Who ever said, “Why not buy the rights to Death Race 2000”, deserve to be the CEO of Netflix. The movie is very male orientated but most who visit my site are men, so it makes the list. This movie is just great and if I remember correctly, it gets No. 1 our B-Movies List . Set in the year 2000, competitors race across America, knocking down as many men, women and children as possible in order to score points. It’s even better than it sounds. Take a look, you won’t be disappointed. You’ll see this movie appear across a bunch of my top 10 list on the What Movie Should I Watch website.

4. The King of Kong
It’s a documentary about a guy who is amazing at King Kong. One of the easiest documentaries to watch you will ever fine. This movie is fun to chat about for days after you watch it.

6. So I Married An Axe Murderer
I have such fond memories of watching this movie when I was younger. It’s just so f*cking funny! His poems in the movie or brilliant. What is his occupation? Do we ever know?
“He wants you back he cries into the night, like a fireman going to a window that has no fire, except the passion of his heart.”

8. An American WareWolf In London
My boss has only ever seen about 4 movies and this is one of them. It’s his favourite movie and it’s not a bad choice. It’s a cult movie and just all round great fun.

9. The Thin Blue Line
A man got off death row after this movie was released. It highlights everything about perception and objectivity that you need to know. It would make any top 10 documentary list ever. Errol Morris is an amazing documentary maker and like the director of our movie below this on our UK Netflix Movies Top 10, you need to see at least one of his movies before you die.

Requiem For A Drem

A Brige Too Far