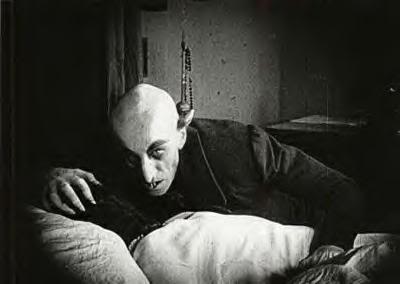 1. Nosferatu
Who says Dracula should be a handsome fella? Fuck Bram Stocker, this is what vampires should look like! This is why it comes in at No.1 in our Top 10 Vampire Movies!

2. Dracula 1992
This movie is a lot closer to the original tale, arguable more so than any other movie on this list…… It does have Keanu Reeves in it but Winona Rider and Gary Oldman’s performances make up for it. Overall, one of the better vampire movies! If you’ve not seen it, get involved… if nothing else it is entertaining.

3. The Lost Boys
What is not to like about this movie? Corey Haim, Kiefer Sutherland, vampire, hot girls, great soundtrack, fun action and a little bit of a twist…..F%ck it, this should be number 1 on our vampire movies list!

4. Blade
Wesley Snipes…. Can’t believe you make a top 10 list on my site, especially considering you’re not on the “So bad…it’s good” list. The opening scene when he drags his blade across the floor in the dance floor, AMAZING! What a great action movie and one of the great vampire movies.

5. Let the Right One In
It makes the list, mostly because children vampires are scary as f£ck! Arguably the scariest film on our list and after all, vampire movies should be a bit scary. If i ever have the pleasure of making a Vampire Movie it is going to be scary as sh^t!

6. Nosferatu the Vampyre
Klaus Kinski is amazing, I feel like creating a top 10 movies list, “films to watch about going down a river in a home-made raft”, even if the only other movie on there was “The Adventures of Huckleberry Finn”.

7. Dracula 1931
Old but still good. I love the look of this Dracula. It’s black and white I know but so is Casablanca and pleople love tha movie.

8. Shadow of the Vampire
John Malkovich, Willem Dafoe and that guy who’s a vampire in “Blade”. Sounds good…but it’s okay instead.

9. Near Dark
A Kathryn Bigelow Movie…. A vampire movie from a girl you say? We’ll don’t get too excited, it isn’t great!

10. Night Watch
It does have werewolves in it, which i’m not happy about. I was hoping to avoid movies like “Underworld” and that “Twilight” sh^t because vampire movies should just have vampires in them!